Persoon rematch must wait as Serrano up next for Katie Taylor 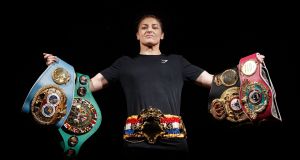 Katie Taylor will not meet former lightweight champion Delfine Persoon in her next bout. The Bray champion, who defeated the Belgian WBC title holder in a majority decision in New York last weekend, has signed a deal to meet Puerto Rican Amanda Serrano, probably in September or October of this year.

Taylor and her manager Brian Peters have said that while Persoon deserves a rematch after a bruising and physical 10 rounds in Madison Square Garden, it will not take place until Taylor, holder of the four belts of the principal sanctioning bodies as well as the Ring Magazine belt for the champion boxer in her division, meets Serrano and probably Norwegian Cecelia Braekhus, the undisputed welterweight champion.

“The deal is done to fight Amanda Serrano,” said Peters. “And she has had one fight [of three] out of the deal so she is committed to it and agreed to it by having the one fight. [Promoter] Eddie Hearn now controls her next two fights.

“We started last October. Katie fought Cindy Serrano. That was the start of building up the fight with her sister Amanda Serrano and then in turn Eddie signed her up. So Amanda Serrano is our preferred choice this year. The deal is done, the purse is agreed. She has signed. We have agreed and she has agreed and I have seen the contract so I don’t know what more we can do.”

The bout is expected to take place in the Hulu Theatre, which seats between 2,000 and 5,600 people and is part of the Madison Square complex. Taylor is also expected to begin headlining her own events.

Ireland is not in the plans in the near future. Like Belgium, a fight in Dublin would not square with the commercial plans or contract Taylor has with sports streaming company DAZN.

“Correct. Exactly,” added Peters. “That [Hulu] is our first choice, our preferred choice and that Katie starts topping shows. DAZN are happy to run with it. Amanda Serrano, we’ve talked about it long before this fight. Have no doubt about it Delfine Persoon will get her opportunity again.”

But the Persoon fallout has not disappeared, although, there is nothing much the 34-year-old can change. An offer from her team earlier this week of a €300,000 purse was dismissed out of hand by Taylor.

“It doesn’t make any sense at all,” she said.

“It’s ludicrous actually. It is a crazy statement,” added Peters. “She is not in any position to be making any demands. If she is that interested let her go to America and start making a bit of a name. I suppose that was part of the problem. Every time Katie Taylor fights everybody just expects her to win.

“We certainly gave Delfine Persoon, the WBC champion, plenty of respect. I don’t think too many people did or bothered to watch her. She is a great fighter. She has had more knockouts than Katie has had fights. It was only Katie’s 14th pro fight. The journey continues. We have our plans and our path set out.”

But the Belgian team have also continued to express their disappointment pointing to Persoon being asked by the New York State Athletic Commission for blood tests hours before the fight last Saturday.

She declared she has asthma for which she uses an inhaler, although does not require a prescription. When used according to regulation it is not prohibited by the World Anti-Doping Agency. Meirhaeghe Maarten, a doctor who accompanied Persoon to New York and who also works with the Belgian pro cycling team Lotto Soudal, described it as “completely unnecessary”.

Both fighters were drug, blood and urine tested after the bout, although it was not part of the Voluntary Anti Doping Association (Vada), an independent organisation founded to offer and promote effective anti-doping programmes in boxing. The Vada testing must be done in stages in the lead-up to fights and not on the night of the night.

Persoon’s defeat means patience on her side. But Taylor refuses to slow down and while she hopes not to have as physical a fight for some time, she was not taken by surprise by Persoon’s stamina and domination of the latter rounds.

“We knew that as well,” said Taylor. “She punches non-stop for the 10 rounds. She’s as strong [in the 10th] as she is in the first. So, I knew my conditioning had to be brilliant for that kind of fight.

“I knew it was very, very close. That’s for sure. I knew it could have gone either way. But I think both Brian and Ross [Enamait] were very confident that I’d won the early rounds, and it definitely reassured me. But I was definitely delighted and relieved when the decision was announced.”

Taylor will remain in Ireland for a few weeks to recuperate before returning to her base in Hartford, Connecticut.