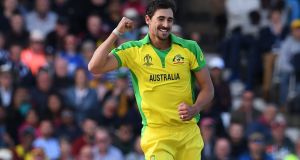 West Indies captain Jason Holder said his batsmen need to take more responsibility after they lost to Australia by 15 runs in the Cricket World Cup at Trent Bridge in Nottingham on Thursday.

Chasing 289 for victory, West Indies made a poor start before Shai Hope (68) and Nicholas Pooran (40) rebuilt the innings, but the Mitchell Starc-led Australian attack restricted them to 273-9.

“Guys just need to learn from the mistakes that they make,” Holder told reporters.

Asked to bat on a flat pitch at Trent Bridge, champions Australia got off to a terrible start as they were reduced to 79 for five before Nathan Coulter-Nile (92) and Steve Smith (73) shared a 102-run stand for the seventh wicket.

That helped the Australians post a competitive total and they went on to secure their second win of the tournament.

“We definitely missed an opportunity,” Holder said. “It’s a bit disappointing to be losing a game like that when we’re in full control of the game, but these things happen.”

1 Tipping Point: DeChambeau’s transformation raises questions, but who will ask them?
2 Dara O’Shea moves West Brom closer to a top flight return
3 Roger Federer: The balletic genius whose greatness goes deeper than numbers
4 Monica Seles: The warrior queen who could have been the best ever
5 John Egan the hero for Sheffield United against Wolves
Real news has value SUBSCRIBE