England capitulate as Australia draw first blood in the Ashes 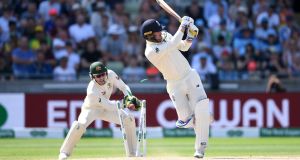 The end was swift, ugly and emphatic for England. They were bundled out for 146 by 3.15pm. At the conclusion of a cacophonous Test all the noise came from the Australian fans in the Hollies Stand: “Same old Aussies. Always winning,” they chanted. It was a numbing defeat for Joe Root’s team, who had been ahead in the game for two days but after five were overwhelmed by 251 runs. They have nine days to recover before the two teams meet at Lord’s.

For Australia this was the best type of victory: from 122 for eight on the first day, from a first-innings deficit of 90, whereupon their proven class performers came to the fore: the inevitable man of the match, Steve Smith, was brilliant in both innings and on the final day Nathan Lyon exploited a dry, brown surface with the ruthless efficiency of the gnarled old pro. Four more wickets at Lord’s next week and Lyon overtakes Dennis Lillee as the third highest wicket-taker for Australia in Test cricket.

Here Lyon tormented England on a pitch behaving as it should on the fifth day of a Test; there was turn, sometimes sharp, usually slow. Lyon knew the conditions were in his favour. Picture him rubbing his hands with glee overnight, anticipating how he was going to hound English batsmen left with nothing to play for except the draw. “This is my day; these are my conditions,” he must have been saying, a conversation that Moeen Ali has seldom had with himself.

This was a day for Lyon to cash in. Some patience was required but not much. His first wicket came in his fourth over, a nerve settler. After that he gave the batsmen no respite; there were no freebies; he probed at pace – he has become one of the quicker spinners in the world – and as Jason Roy discovered it is not so easy to advance down the track to him; the ball is not in the air for long and it is always fizzing as it leaves his hand. On this biscuit-coloured surface there were now crumbs and more often than not the ball gripped upon them. Cameron Bancroft at short leg was on constant alert.

At the other end the Australian pacemen scented a special victory. There was not much in the pitch for them but they tore in and were on target. Not for a second did they look betrayed by the sluggishness of the surface. On this occasion Pat Cummins, unrelenting in his well-directed pace and aggression, was rewarded with the other four wickets.

This has been a gruelling, closely fought Test but look at the eventual margin of victory and it becomes a humiliation. If this was the most satisfying of victories for the Australians, which has their confidence soaring, it is the most galling imaginable for England, leaving them with so many problems ahead of the Lord’s Test. The blunt yet undeniable truth is that the Australians have two pace bowlers currently on the sidelines, Mitchell Starc and Josh Hazlewood, who would be inked to England’s team for that match. And they have a man called Smith. England have no Anderson and are likely to pin their hopes on a debutant who will be preparing for a Test by bowling for Sussex second XI in midweek. Moreover they have too many players out of form: Moeen, Jonny Bairstow, Jos Buttler.

At the start there was no indication that a funereal procession was imminent. The Surrey pair bedded in without too many alarms but then Cummins surprised Rory Burns with a short delivery, which jagged off the pitch towards the off-side. Burns was left fending at the ball in ungainly fashion and it lobbed gently to Lyon at cover, an odd dismissal.

Jason Roy and Root batted sedately enough, sweeping Lyon occasionally, which seemed as effective as any statutory forward prod against the turning ball. Then Roy advanced with purpose but no handbrake. He was aiming to hit an off-break from Lyon in the general direction of the city centre and, when failing to get near to the pitch of the ball, he carried on regardless. The ball turned between bat and pad before hitting the stumps. If Roy continues as England’s Test opener it may be necessary to become accustomed to a few dismissals like that. Until then he had looked the part but he has yet to acquire the knack of giving the appearance that he has just been dismissed by an unplayable delivery.

It was not a good way to go and his departure settled any nerves that Lyon might have been feeling. Remaining wicketless for long on a spinning pitch can addle the brains. Lyon relaxed now. He merely raised eyebrows when Joe Denly slog-swept him for two boundaries. Then he plugged that gap at midwicket to make the batsman play with a vertical bat. Soon after Denly was caught at short leg via bat and pad. Root followed in similar fashion though this time the catch came from the bat alone.

The procession gained in speed after lunch when it became positively indecorous. Buttler, blocking dutifully, was skittled by Cummins; Bairstow soon fended against the same bowler and was caught in the slip cordon; Ben Stokes edged a beauty from Lyon, who polished up the other left-handers without delay. Moeen avoided his pair but his place at Lord’s is far from secure. Chris Woakes hit a few consolatory boundaries and will certainly be on patrol in the next Test. He looks one of the few England players on top of his game.

Cummins finished with four for 32 while Australia’s off-spinner, who missed a great chance of a hat-trick since it was a hobbling Jimmy Anderson who denied him, ended with figures of six for 49. The Lyon will sleep well tonight. - Guardian