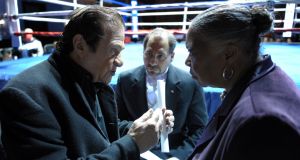 One Ohio winter’s night, somebody stuck four sticks of dynamite in the front wheel well of Don Elbaum’s ‘67 Pontiac in the car park of the Highlander Motor Inn in Warrensville Heights. As the police sifted through the wreckage from the explosion, a detective started to ask Elbaum the type of questions usually posed to a person who’d just avoided assassination. Was there anybody he owed money too? Did he know of a particular individual with a reason to want him dead? Perhaps he could name possible suspects?

The boxing promoter looked at the cop, smiled and said, “You’re going to need a bigger notebook.”

On the 25th anniversary of Sugar Ray Robinson’s professional debut, Elbaum hosted a celebratory dinner ahead of his latest comeback bout. Near the end of the meal, he gave a poignant speech about the greatness of the guest of honour and then presented him with a pair of tattered leather gloves, the very ones the five-time champ wore for his first victory at Madison Square Garden quarter of a century before. Tears welled up in Robinson’s eyes as he marvelled at the faded 6oz relics of a previous life. Then a photographer asked him to don them on for a picture and he discovered they were both left-handed remainders, snaffled by Elbaum from a dusty corner of some gym when he dreamt up the gimmick.

They are inducting Elbaum into the International Boxing Hall of Fame in upstate New York this Sunday. At the annual gathering of fistic luminaries, tall tales will be told of one of the sport’s most eloquent carnival barkers, a man whose burgeoning career as a child prodigy pianist was derailed by the mesmeric sight of Willie Pep working his magic in the ring.

A potent amalgam of charm and chutzpah, he started matchmaking bouts during puberty and, after piecing together his first fight card at the age of 18, the New York Daily News dubbed him “the boy promoter”. More than six decades and an estimated 1,300 promotions later, his peers finally formally acknowledge his, ahem, rather unique contribution as promoter, matchmaker, manager, cornerman, cutman, and, on nights when a fighter never turned up, last-minute replacement too.

“As the referee gave instructions in the middle of the ring,” said Elbaum, “I would lean into my opponent and say, ‘Don’t forget who’s payin’ ya.’”

A key member of Al ‘Blue’ Lewis’ camp when he fought Muhammad Ali in Croke Park, Dublin, of course, afforded Elbaum plenty opportunity to amplify his canon of stories. Dating a Vegas showgirl at the time, she somehow got him invited to tea with then Governor Ronald Reagan at his suite in the Gresham Hotel. He met the IRA’s master bomb-maker through a journalist friend from Philadelphia, and at one juncture threatened Lewis with violence for not applying himself properly in training. From his perch in the corner on fight night, he also bore witness to the resourceful natives circumventing ticketing procedures in the moments before the first bell.

“Then they played the Irish anthem and everybody was standing to attention and halfway through that song, I swear to you, it was like the scene in a western movie when the Indians appear over the horizon,” said Elbaum. “Thousands of Irishmen came in over the walls and fences and nobody made a move to stop them. It seemed to happen on cue; sing the Irish anthem and everyone gets in free. Wherever the holes were, they found them.”

Not long after his trip to Ireland, he earned his most dubious footnote in history when a Cleveland numbers guy called Don King enlisted his help running a promotion to save a local hospital. Elbaum got Ali (whose kids he used to babysit) to fight an exhibition that raised $85,000. Just $1,500 was left once King finished skimming off the top, the hirsute newcomer discovering along the way that boxing could be a lucrative enterprise for a man of his wiles and the game was never the same again. The pair went into business together briefly before Elbaum realised even he was out of his depth with this huckster.

“You’d be a billionaire if you stuck with me,” said King when they crossed paths years later.

“I’d be in jail if I stuck with you!” replied Elbaum.

He eventually served prison time himself for tax offences, a hazard of the hustler’s profession, especially when you visit every corner of the sport, from klieg lit nights headlined by Sonny Liston, Floyd Patterson, and Ali, to, more recently, sordid back rooms in Wyoming hosting bareknuckle contests. No promotion too big. No unique selling point too small. He once paired off two winless heavyweights in a contest to find the world’s worst fighter and force him to retire. It ended in a draw.

Toiling for decades in the foothills of the sport, Elbaum famously sold advertising space on the soles of fighter’s shoes to make every knock-out a commercial opportunity and his advertising posters became part of boxing lore. One claimed a contestant was “undefeated, with the exception of five fights”, another cited a puncher who boasted an 11-0 record with 18 knock-outs, and then there was the case of the debutant billed as having never lost a bout.

“Boxing is in my blood,” Elbaum told Thomas Hauser one time. “It’s a beautiful sickness.”