Dave Hannigan: A dodgy doctor, a Swiss courtroom and a sad tale in Ali's great story

In his desperation due to poor health, the greatest put his faith in Dr Rajko Medenica 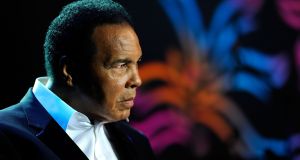 As he left the Geneva courtroom, Muhammad Ali was corralled by reporters. A mundane medical fraud trial suddenly elevated by the presence of the most famous retired athlete on earth.

“Are you still the greatest?” asked one journalist.

The sombre tone, the flat delivery, far removed from the trademark bombast of his pomp. He exited the building as he’d entered it hours earlier, slowly, shuffling, his gait almost uncertain. No hint of any floating butterflies now. Just the portrait of a handsome middle-aged man in a suit, struggling to carry the new, physically diminished version of himself in the public square.

It was May, 1989. Ali had flown to Switzerland to testify on behalf of Dr Rajko Medenica, a Yugoslav who was, by then, somehow, his personal physician.

The medic was being tried in absentia for a $3 million fraud (a sign perhaps he was not on the up and up), and his most famous patient agreed to traverse the globe to give a character reference. Once you were in with Ali, there were no lengths he wouldn’t go to on your behalf.

Once he took the stand, the interpreter had to remind him repeatedly to speak up. The booming voice that launched a thousand quips was so weak and inaudible that his wife Lonnie had to intervene to speak on his behalf more than once.

It was F Lee Bailey, the defence lawyer later to gain infamy through his work for OJ Simpson, who came up with the idea for Ali to appear as a living, breathing example of Dr Medenica’s alleged ability to miraculously heal the sick. Once upon a time that would have been a smart play. Not anymore.

“Muhammad had a low image of himself,” said Lonnie, backing up that assertion. “After this treatment, he was full of life.”

Unfortunately, neither answer tallied with the reality of the paltry figure on the witness stand. He didn’t look full of life. Far from it.

Maybe it was the jet lag but for somebody there ostensibly to bolster claims of his doctor’s genius, Ali’s physical condition wasn’t exactly a profession of faith. In total, he uttered just seven laboured sentences under cross-examination. The most loquacious athlete of them all strangely stuck for words. This was the depressing point of his life he’d reached.

In the wilderness years immediately after being diagnosed with Parkinson’s Syndrome, Ali often appeared an obsessive on the look-out for miracle cures, questing for any innovative medical treatment that might ameliorate his condition.

Desperation made him even more vulnerable than usual to snake-oil salesmen and outright quacks. In the summer of 1987, he had flirted with allowing a Mexican doctor to extract cells from his adrenal glands and implant them in the part of the brain that regulates body movement. Two of the first 18 people who tried that procedure had died.

A year later, he fell under the spell of Dr Medenica, whose former patients included Marshall Tito, president of his home country, and the former Soviet leader Leonid Breshnev.

While his medical peers were sceptical of his often bizarre methods, he was gaining a following in South Carolina for a blood-cleansing technique called plasmapheresis and his outrageous claims about defeating cancer. He garnered immediate national headlines when he told the Washington Post Ali had been misdiagnosed by all the others.

According to Dr Medenica, the three-time heavyweight champion’s problems were not Parkinson’s and his deterioration was unrelated to two decades shipping concussive blows to his head in the boxing ring. His difficulties were actually down to household pesticides.

He contended that Ali’s supercharged athlete’s metabolism made his body unable to excrete toxins from those products fast enough through the years. Once that issue was dealt with, his symptoms would disappear. That simple.

“My goal is to remove the circulating toxins,” said Dr Medenica, ahead of an initial eight-hour procedure in which he replaced Ali’s plasma with a mixture he had prepared. “By the end of the year he should be much better.”

Almost exactly 12 months after that bold pronouncement, Ali was in the Geneva courtroom, trying his best, and, mostly failing, to appear in any way improved.

“How do you feel?” asked the prosecuting attorney.

Pressed about exactly how his quality of life had improved under Dr Medenica’s treatment, Ali extended his arms in front of him and said: “When I held my hands like this they shook. Also, he cleaned my blood”.

He also backed up the doctor’s strange assertion that boxing hadn’t caused his problems by pointing out: “Joe Frazier has no problem. He’s taken more blows than me”.

And, when the prosecutor pointed out the obvious, that he couldn’t possibly claim to have had his speech improved by Dr Medenica, Ali said: “I talk when I feel like it. Sometimes I don’t feel like it. I’m tired of press conferences”.

Then, he pretended to snore. The type of gag that always yielded laughs except the joke wasn’t funny anymore.

Dr Medenica was found guilty of fraud by the Swiss but never extradited. Ali remained in his thrall until 1994, a period during which his condition only worsened. The pesticides proving peskier than the miracle doctor predicted.