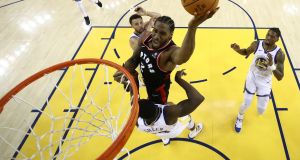 Kawhi Leonard of the Toronto Raptors attempts a shot against the Golden State Warriors during Game Three of the 2019 NBA Finals. Photo: Ezra Shaw/Getty Images

It had been 20 long days since the Golden State Warriors played at Oracle Arena, an eternity in basketball time.

Their big homecoming with the arena they’re about to bid farewell to was a flop, with the injury-riddled Warriors falling to the Toronto Raptors, 123-109, in Game 3 of the NBA finals. The Raptors now lead the best-of-seven series, two games to one.

Stephen Curry did anything and everything to try and keep the Warriors alive. He finished with 47 points on 45.2 per cent shooting, the most he’s ever scored in an NBA finals game.

The two-time NBA Most Valuable Player helped the Warriors claw their way back from a 16-point deficit by drawing a foul from Serge Ibaka with 10:30 left on a three-point attempt, and went on to make all three free throws to bring the Warriors within seven points, 96-89.

But the Raptors responded with a 6-0 run and went on to push their lead to a game-high 17 points after Kawhi Leonard made a driving layup with 5:42 left. The Warriors never saw a single-digit opportunity again.

Lowry and Green were especially lethal from beyond the three-point line, where they combined for 11-for-19 from the arc.

The Warriors struggled to get enough offense without the fire power of Durant and Thompson. Draymond Green had 17 points and Andre Iguodala added 11, but no other Warriors scored in double-digits.

Thompson’s status dangled in the balance until tipoff. Seventy-five minutes before the game, Warriors’ coach Steve Kerr still didn’t know whether the Warriors were going to allow Thompson to play. Kerr pointed out that Thompson was “making a very strong case” and that he was “desperately trying to be out on the floor.” But Thompson, who sustained the injury with 7:59 left in Game 2, was officially ruled out minutes before the game, snapping a streak of playing in 120 consecutive playoff games.

Game 4 is on Friday night in Oakland. – Guardian