The debate may still rage about Saturday’s verdict, but at least it has got people talking 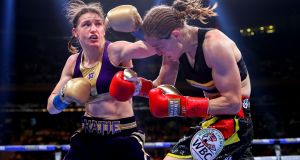 Long before Katie Taylor stepped into the ring in New York last Saturday night she had become one of the most respected and admired sports people in Ireland. A pioneer in her sport, a trailblazer when it comes to women’s boxing.

When she won her Olympic gold medal in London 2012 it was the first time for women’s boxing in the Olympics and Katie was a driving force behind its inclusion. By all accounts her unification fight last Saturday night surpassed the energy and atmosphere of the Excel Arena seven years ago at the London Olympics.

One of the most interesting parts of her latest fight was how the closeness of the contest, and how the result has got people all over the world talking about women’s boxing in a way it has never been discussed before. Even if you speak to someone that has never seen or read a word about women’s boxing, last weekend’s fight from New York opens up a whole new conversation.

The tightness of result, the quality of the boxing, seeing Katie battered and bruised in the RTÉ interview afterwards added even more fuel to the fire.

Yet to a lot of people it’s not all about the fight but the preparation and the way Katie carries herself before during and after each fight. Many people want to see Katie win. They don’t particularly want to see the physicality of the fight and what it takes to win, they just want to see the result and the undisputed World Champion return to Ireland a heroine once more.

Even for those that do sit up into the early hours of the morning, the result may not always be so clear. That’s part of the problem in any sport where there is room for human error, where there is no clear start and finish line, the outcome decided by a panel of judges and their own perception of the fight.

These are trained professional boxing judges who know the sport better than anyone. But like we have often seen in football or rugby, it’s actually not that unusual for a referee to get a decision wrong. It’s why more and more sports are using the fourth official if they are unsure of a call.

This is not a practical tool for boxing, as then you would lose the natural flow of a fight and it might end up changing the whole sport. Possibly more people would then get to understand the scoring, but like anything else, if you watch enough, take the time to do a little research of your own, then you eventually work it out. Even so, it can still be unclear to determine a winner - especially in a well-matched fight as we saw last Saturday when two of the best lightweight boxers came together in the ring.

You often hear a commentator say it’s just too close to call at the finish of a 100 metres sprint race, or they might just leave that to the photo finish judges. When you have a high quality competition, like last Saturday, probably the highest level of fight that Katie has ever faced, you can get to the end and still be unsure which way the decision will go. Too close to call, maybe, but still we want to see a winner.

Part of the problem with most of the Katie Taylor fights since she turned professional is the fact it can be tricky to actually watch them. Especially when it’s on at 2am Irish time and not available on free to air TV. Most people are sidelined before it even begins. Even a few days later it’s still hard to get more than a few blurred highlights of the fight, so our view of the actual action is limited to the media reports in the paper and online.

It can’t be easy to spend all your life training to be the best in the world and on the biggest fight of your career it comes down to what the eyes of three judges see and score. I always preferred the clear start and finish line. I didn’t need to understand the rules of rowing to indisputably see that Sanita Puspure took the European single sculls gold medal also last weekend - like Katie, just hanging on at the end for the win.

To me Katie also comes across as a contradiction to the world of professional boxing: a hard-worker, committed to the goals she has set herself, physically, mentally and spiritually. Very little changes the closer Katie gets to the fight. She almost looks embarrassed by the build-up to the final weigh-in and face-off, as if everyone else is doing all the promotion on her behalf.

She appears so humble and you feel she just wants to fight and compete. You sense she would rather do without all the bravado and showmanship expected of the fighters as they are presented on stage. When the time comes for Katie to walk out for the competition she is a changed person, there is an aura about her, it emanates a belief in her and her supporters that anything is possible and she will never give in.

Delfine Persoon appeared like a walking billboard, while Katie just had her own brand and Psalm 18. I can’t recall a single brand on Persoon’s gear, but straight away I was looking up the Bible and Psalm 18, where there is quite a lot of fighting talk. Why was this so important and so personal to Katie that she had it visible on her top and shorts and robe as she walked to the ring?

This was the aura that Katie was able to carry into the ring. When you have two fighters equally fit and separated by the smallest of margins, matching each other through 10 two-minute rounds, there needs to be an extra dimension and extra belief that will lift one fighter above the other.

You get the sense that the belief and strength that Katie takes from prayer gives her the edge when it comes to delivering what looks like a near impossible result, yet she gets it every time. There is strength in words that also deliver peace and calm at a time when there is total chaos all around.

Some people use sports psychology methods at these times; Katie uses words from the bible to bring her to the place she wants to be, on top of the world. There is no doubting the physical training and sacrifices required to fight at that level, and this was the toughest fight we have ever seen Katie take on.

Up to now she was always so much better than her professional rivals, often hardly a competition, but Saturday night was different. Katie had to dig deep, she had to hang in when things were not going her way, and she must’ve felt some rounds slipping away. Yet as she held her strength and belief and faith, you just wonder did she have a mantra going through her head as she was tiring. What were those words?

I imagine she must have had a few from Psalm 18 as she called on her strength to get her over the line and the verdict she took by the narrowest of margins - one that is still being analysed and debated. The biggest winner appears to be women’s boxing.