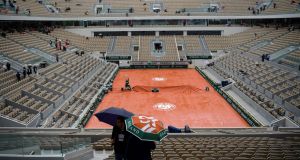 People hold their umbrella in the empty stands as rain falls on Wednesday at the Roland Garros 2019 French Open. Photo: Christophe Archambault/Getty Images

The French Open had its first rainout in three years on Wednesday, with daylong showers at Roland Garros forcing the postponement of the four scheduled quarterfinals in men’s and women’s singles before they began.

This figures to be one of the last complete rainouts in Grand Slam history. Starting next year, Roland Garros will have a retractable roof over the main Philippe Chatrier Court, making it the last of the four Grand Slam events to have at least one stadium in which matches can be played in any weather.

The women’s finalists will not get a day of rest before their match Saturday, and the player who comes out of the top half of the draw will be playing her third day in a row. In the bottom half, Johanna Konta and Marketa Vondrousova secured their spots in the semifinals on Tuesday and now do not play again until Friday.

In the men’s draw, the rest disadvantage is even more stark. The players who won Tuesday — Rafael Nadal and Roger Federer — already had two days off before their semifinal.

Whoever reaches Sunday’s final from the top half of the draw — Djokovic, Zverev, Thiem or Khachanov — will have had to play three best-of-five-sets matches within four days, compared with the three matches in six days required of Nadal or Federer.

In 2016, days of rain earned the tournament a nickname, the ‘Drench Open’, and forced the men’s and women’s semifinals to be played on the same day.

This time, however, the tournament’s final stages could be even more complicated, with rain in the forecast again on Friday.

Tournament organisers have not yet decided Friday’s schedule, which will include the highly anticipated match between Nadal and Federer, or even how many stadiums they will use.

Guy Forget, the tournament director, said in a news conference that one possibility was to use the tournament’s new third stadium, Simonne Mathieu Court, to allow the women’s semifinals to be played simultaneously during the session previously designated for men’s semifinals. (Tickets for each men’s semifinal, scheduled for Chatrier, were sold separately, meaning changes to the order of play could anger ticket holders.)

“Don’t write that I said that if it doesn’t happen,” Forget said. “But, I mean, we, at the moment, are studying the worst-case scenario.”

Mathieu Court can seat 5,000 — 10,000 fewer than Chatrier Court, where both women’s semifinals are usually played.

Acknowledging “some players might feel that it’s a lack of respect,” Forget suggested that stadium size was less important at this stage than the women having enough rest — or the same amount of rest — before Saturday’s final.

“There are matches on the WTA Tour that are played on central courts with 5,000 seats,” he said. “So if it were the case, there is nothing negative in playing on this court, which is very beautiful.”

Tournament officials also have not ruled out moving the singles finals.

“I just left the room to see the different options that we have,” Forget said. “None of them are ideal.”

Ticket holders for Wednesday will receive full refunds, and be able to attend Roland Garros on Thursday using Wednesday’s tickets, with entry permitted to all courts but Chatrier. – New York Times