Disqualification for Lynch mars a day of rich promise 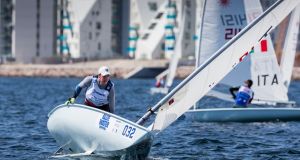 Ireland’s Finn Lynch on his way to winning the first race in the Gold fleet for the Laser event at the Hempel Sailing World Championships 2018 at Aarhus, Denmark.Photograph: David Branigan/Oceansport

In a thrilling opening to the Gold fleet series for the Laser class at the Hempel Sailing World Championships in Denmark, Ireland’s Finn Lynch served up a solid race win in a 58-strong fleet.

Light winds dogged the event for most of the day and an earlier race had to be abandoned after the first leg when the light breeze faded. Lynch had been lying around 20th place when the race was stopped.

At the restart hours later, the light breeze just held long enough to complete the race that saw Lynch make perfect tactical calls for the favoured side of the course.

While dropping to second place at the first mark, he already held a 12-second advantage over the third placed boat. On the downwind leg, he overtook the American leader and extended his lead to 40 metres.

On the second lap of the course, the chasing pack closed marginally but he protected his first place all the way to the finish.

However, in terms of joy he gave little away and with good reason. The race win boosted his overall place for the complete regatta that includes the qualification round to 18th overall. And he was inside the Tokyo 2020 qualification criteria.

However, the fickle conditions persisted and with a second race remaining for the day plus two further races planned for Wednesday, he was far from complacent. As if to make that point, he went on in the second race to be scored as disqualified under the ‘Black Flag’ rule for boats that infringe the starting-line before the starting-signal.

This instant disqualification is used by race officers after previous attempts at race starts have failed to keep order on the fleet. The disqualification is being appealed and if successful, Lynch could only manage a 32nd place for the race that he continued to sail in.

The Rio 2016 Olympian is the only remaining hope for this year’s Tokyo qualification round of the 14 Irish sailors including development academy athletes in Aarhus.