‘It will be difficult, not having anyone to gauge, but it will force me to just go for it’ 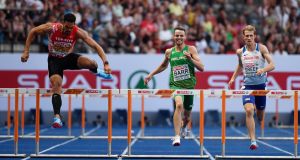 Good news or bad news? In safely negotiating the first hurdle – or all 10 hurdles, to be exact – Thomas Barr has now given himself a chance of winning a European Championship medal in the 400 metres hurdles. That’s certainly good enough for now.

The bad news is that he will have to win it from lane eight, Barr given the outside lane in Thursday’s final after running a little short of his season best, clocking 49.10 seconds, even while finishing fast on the heels of Yasmani Copello from Turkey, who won the semi-final in 48.88.

Only the top two were automatic, and the two the semi-finals were quicker and deeper. Not that Barr appeared overly daunted by the prospect.

Walking down the cool marble steps into the mixed zone, the trademark chirpy smile only briefly left his face when kindly informed, by us, that’s it’s lane eight – that final showdown set for 7.15 pm on Thursday Irish time.

“Well it is what it is,” he said, half beaming again. “To me, I can take positives and negatives from each lane. In lane one, you have a view of the whole field. In lane eight, it’s not as sharp a turn, so you can actually attack the hurdles a lot more.

“I’ve actually run in every lane possible at major championships. Like in Beijing, at the 2015 World Championships, I was in lane nine, twice. Obviously I’d prefer lane four, five or six, and I probably had more in me today, which is a shame.

“But overall job done. I was fairly nervous, and usually like the heats as a bit of a pipe opener. I felt very well until hurdle four, then maybe just relaxed too much, and then had to refocus. But I knew I had the strength on the home straight, and I did. More to come in the final, hopefully.”

There will certainly need to be: World champion Karsten Warlhom from Norway won the first semi-final easing up in 48.67, and the second semi-final was won by Rasmus Magi of Estonia in 48.80; seven of the eight finalists have run faster than Barr this season, but he does still boast that Irish record of 47.97 when finishing fourth at the Rio Olympics.

Still taking the positives, he pointed to his previous experience in the outside lane: the French athlete Ludy Vaillant will be in lane seven, Warholm in six. “Just go for it, really hard, the first 200m particular. It will be difficult, not having anyone to gauge, but it will force me to put on the blinkers and just go for it.

“There were nerves too, and it was also very hot, just warming up, it felt very, very hot. So I’ll take a lot from the race, and happy as well knowing there were some lightning fast times. Warholm was holding back a bit, Copello too, but I can just focus on my own race now.

Asked about his chances of a medal, he paused and briefly stalled that chirpy smile. “I could finish last or I could finish first or anywhere in between, and I’m aware of that, and will probably need to run a PB to get the medals. I think a medal is there just as much as I think a medal isn’t there. I’m really sitting on the fence on that one?”

Earlier in the day there were some very brief medal hopes for Brendan Boyce, who put himself in the lead group of the 50km walk, before fading right back to 19th in the last 15km.

“Horrendous”, “traumatic”, “brutal at the best of times”, and “technically his worst ever”: that’s how Boyce later described the experience, yet still he found something positive out of it.

“I’ve only been back race walking for three weeks, after six weeks of cross training,” he said still rubbing the dried salty sweat from his eyes. “Even getting to the start line was against medical advice, and I know there were a lot of worried people on the sideline, worried was I going to finish.

“Even if I went out conservative, I was still going to suffer in the last 15km. So better than go easy and dying, I may as well have a pop, and gain some experience out of the way. Even if you’re 100 per cent the 50km is never a given, and I needed to take something positive out of this race. Rather than just go off, die, and it all being negative.”

Earlier, back at the Olympic Stadium, three of the younger and less experienced Irish athletes got there opening chance on this stage At age 20, Chris O’Donnell was the third youngest man in the 400m, and raised his best performance of the season, clocking 46.81 out of lane one – only not enough to progress.

In the women’s 800m heats, Claire Mooney went for broke, leading around the final bend, only to fade to seventh in 2:04.26. Síofra Cléirigh Büttner ran a little more astute and sixth 2:02.80. Neither good enough to make the semi-finals.

Wednesday in Berlin: Irish in Action (all times Irish)