Sailing: Frustrating day for Seaton and Guilfoyle in Denmark 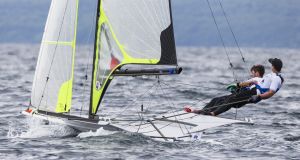 Light and fickle winds at the Hempel Sailing World Championships in Denmark made for deeply frustrating conditions for the remaining Irish sailors aiming to complete their qualification round in the 49er skiff class.

London and Rio veteran Ryan Seaton of Ballyholme Yacht Club and Séafra Guilfoyle from the Royal Cork Yacht Club were on the cusp of achieving a place in their class Gold fleet when the second race was abandoned as the pair were in fourth place.

Earlier, Seaton and Guilfoyle scored a sixth place in a flukey opening race of the day in which they had been leading in the opening stage.

Their performance for the day indicates consistent top-ten form after a poor opening day that is weighing their overall standing.

A decision whether or not to continue the qualification round on Tuesday’s official reserve day was pending. If there is no racing, Seaton and Guilfoyle will contest the remaining two days in the Silver fleet, short of expectations for this new partnership.

Meanwhile, weather permitting, racing in the Gold fleets for the Laser and Laser Radial classes will commence on Tuesday.

Rio 2016 veteran Finn Lynch from the National Yacht Club comfortably qualified for his Gold fleet on Sunday but still has some ground to make up to qualify Ireland in the class for Tokyo 2020.

Howth Yacht Club’s Aoife Hopkins will start her first World Championships in the Gold fleet for the Laser Radial event in which Annalise Murphy won Silver at the Rio Olympics.

Murphy is not competing in Aarhus as she has switched events to the 49erFX skiff and is training up to competition standard with Katie Tingle.