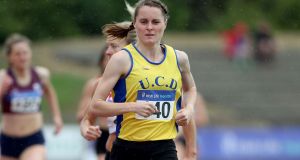 Ciara Mageean is one of Ireland’s main medal hopes at the European Championships in Berlin. Photograph: Bryan Keane/Inpho 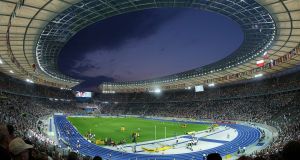 Follow that, as Neil Diamond once said backstage to Bob Dylan, the rest of which is better left unsaid. Some acts will always be bettered when followed.

The novelty of the European Athletics Championships in Berlin being twinned with a range of championships taking place in Glasgow has helped raise expectations, or at least Irish hopes - Shane Ryan already winning a bronze medal for Irish swimming in Glasgow, and the O’Donovan brothers Gary and Paul winning silver medals for Irish rowing.

All against the backdrop of the Irish hockey success at the women’s World Cup in London. Now is not the time for mediocrity.

For the team of 42 Irish athletes in Berlin therefore it’s not an easy act to follow, especially with these championships already billed as the “strongest ever seen”, according to European Athletics president Svein Arne Hansen. The 24th edition will feature seven reigning Olympic champions, 15 world champions and 34 gold medallists from the last European Championships in Amsterdam two years ago.

There will however be some medals hopes inside Berlin’s Olympiastadion, and possibly out on the streets of the city too: Breitscheidplatz Square in the centre of the city acting as the finish line for the marathon and walking events, and indeed the nightly medal ceremonies.

In that Irish team of 42 are two previous medal winners: Ciara Mageean won bronze over 1,500m in Amsterdam two years ago, in a marginally condensed programme to coincide with Olympic year, and Mark English also won bronze over 800m in Zurich in 2014, under the full programme of events.

Mageean is running herself back into medal form, running 2:02.13 for 800m at the Morton Games last month, and likewise 4:04.13 over 1,500m in Barcelona the week before, before winning both events at the National Championships. With defending champion Sifan Hassan from the Netherlands opting for the 5,000m there’s at least one medal chance opened up there.

In truth, English is nowhere near his 2014 form, his main goal to the make the final, and is joined in that event by Zak Curran, who also qualified for Berlin with the 1:46.67 he ran in Oslo in June.

After his 11th hour transfer of allegiance from Great Britain, Leon Reid is definitely targeting a place in the 200m final: just turned 24, with a best of 20.27 seconds, Reid won bronze for Northern Ireland at the Commonwealth Games in Australia back in April, thus claiming the first Commonwealth Games athletics medal for Northern Ireland in 28 years.

For Reid, whose late birth mother was from Belfast, the medal record is impressive: he won silver at the European Youth Summer Olympic Festival, the 2013 European Athletics Junior Championships and 2015 European Athletics Under-23 Championships, and also a relay silver medal at the 2008 Commonwealth Youth Games - all while representing Great Britain. He finished third in the British championships last month, running 20.27 on route, and is also now eligible for Irish records, and the 200m mark of 20.30 set by Paul Hession back in 2007.

Then there’s Thomas Barr: two years on from his fourth place in the Olympic 400m hurdles final, clocking a national record of 47.97, the Waterford man is gunning for another final place at least. He too is running into top form, clocking 48.99 in London last month, finishing third to 22-year-old Norwegian Karsten Warholm, and Turkey’s Yasmani Copello - the two clear medal favourites in Berlin.

Barr does benefit from a bye straight into the semi-finals, ranked in the top-12, but he doesn’t necessarily see that as offering any great advantage: “It that leaves nothing to chance, really,” says Barr, his semi-final set for 6.45pm on Tuesday evening (Irish time). “I don’t particularly like what they’re doing, because I like to run round. And the seeded athletes will get the best lanes as well. And then with only two automatic from the semi-finals, I will need to win it really, to be sure of a good lane for the final.”

Barr signed off for Berlin with a new championship record at Santry, clocking 49.56 seconds to improve his own 49.68 set in 2015. But in a near flat-out lap of the track lined with 10 hurdles, each three-foot high, anything can and often does go wrong, and getting into that final will require Barr to be at his best.

Ireland have only won 14 medals in the previous 23 editions of these Championships (first staged in Turin in 1934, and going biennial again since 2012): five of those belong to Sonia O’Sullivan, another two to Derval O’Rourke. After English winning bronze in 2014, and Mageean likewise in 2016, the hard act is clearly there to follow.

Starting brightly on ‘Day Zero’s’ preliminary 100 metres heats was Phil Healy, who secured her place in the semi-finals on Tuesday with a cool and measured second place, clocking 11.44.

With the top three automatic, Healy did all that was required, though it was a blanket finish between the top three. The Cork women will need to come close to her Irish record on 11.28 to make the final. AljaDel Ponte of Switzerland took the win in 11.39.

Gina Akpe-Moses was fifth in her heat in 11.63, narrowly missing out on a place; 11.53 was the best non-automatic qualifying time.

“I’m quite content. Not with the time but happy with the race”, said the 19-year-old Akpe-Moses, in what was her first senior championships. She will be back out later in the week as part of the 4x100 relay.

A best of 7.47m wasn’t enough for Adam McMullen to advance to the final of the long jump.

BERLIN DAY ONE IRISH IN ACTION (ALL TIMES IRISH)