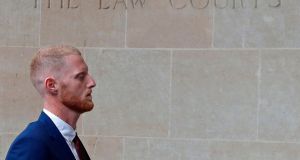 The cricketer Ben Stokes mocked two gay men, “mimicking their voices and mannerisms in a derogatory manner”, in an exchange captured on CCTV, Bristol crown court has heard.

A jury of seven men and five women was shown footage which the prosecution said depicted the Durham and England cricket star mocking the couple, Kai Barry and William O’Connor, and flicking the stub of a lit cigarette towards O’Connor’s head.

Stokes denies a charge of affray relating to a fight later in the evening which left another man with a broken eye socket.

The prosecutor Nicholas Corsellis said that the incident, for which the firefighter Ryan Ali and the former serviceman Ryan Hale have also been charged with affray, was “not a moment of trivial unpleasantness, but a sustained episode of violence which left onlookers shocked”. Ali and Hale have also denied the charges.

Bristol crown court heard on Monday that Stokes “lost his control” and acted way beyond the realms of self-defence during a fight outside Mbargo nightclub in the early hours of Monday September 25th 2017. Stokes had attended the nightclub together with the England captain Joe Root and teammates Alex Hales and Jonny Bairstow after their ODI victory over the West Indies earlier in the day.

Stokes and Hales left the nightclub at about 12.45am but returned at 2.08am. The jury heard that they were refused entry and that Stokes attempted to bribe his way in by offering the bouncer £60 and then £300.

The jury heard that Stokes then insulted the doorman Andrew Cunningham, telling him: “Look at the state of your teeth” – in reference to his two gold front teeth – “They make you look like a cunt.”

Stokes arrived at Bristol crown court just before 9am and was greeted by a throng of photographers. There were eight police officers guarding the gate as he exited a silver people carrier with blacked out windows in front of his wife, Clare Ratcliffe, and his agent Neil Fairbrother.

The all-rounder played a decisive role in England’s narrow Test victory over India last week, helping his team to a tense 31-run win with four wickets in the second innings including that of India’s star batsman Virat Kohli. Stokes, 27, celebrated his match-changing role at Edgbaston, which has been compared to some of the great pivotal moments in Test history, with a roar and a double-fist pump in front of a 25,000 crowd.

But by 10.30am on Monday, just three days later, the former England vice-captain sat glumly in the dock of courtroom No 1. He changed his position from staring intently to sitting with crossed arms as the jury was told he had made a V-sign towards Cunningham after he was refused entry to the nightclub.

Stokes, from Castle Eden, Durham; Ali, from Bristol; and Hale, from Westbury-on-Trym, Bristol, are on bail.

The case, which is expected to last up to seven days, continues.