Extra bucks could be just the boost that Irish hockey needs

Minister says an additional €1.5m is to be allocated to high performance teams

Members of the Irish women's hockey team that won silver in the weekend’s World Cup Final celebrate their return to Ireland with a lot of singing and dancing. Video: Nick Bradshaw & Ronan McGreevy 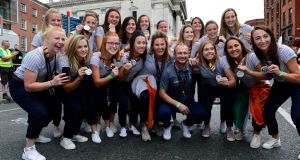 The Irish Hockey team behind the stage on Dame Street following their reception at City Hall in Dublin. Photograph: Cyril Byrne

The funding into women’s hockey must change or the sport will fall back to where it was before the Irish women’s team shattered the glass ceiling in winning a World Cup silver medal in London on Sunday.

After their achievement in becoming the first Irish team in field sports to reach a World Cup final, Irish striker Deirdre Duke echoed her team-mates' sentiments saying Ireland must change the costly environment that has been the norm in the sport.

While Hockey Ireland have said the reviled levy no longer applies to its senior team, the players, who were guests of honour at a civic reception in Dublin on Monday, have reiterated that competing for Ireland continues to come at a financial cost.

We hear that the bandwagon is pretty big so we like the sound of that!

Duke again repeated the message after the World Cup final that the system has to change if Ireland are to have a set-up that would allow them prepare to face teams like the Dutch, who claimed gold after their comprehensive 6-0 win in the World Cup final.

“We hear that the bandwagon is pretty big so we like the sound of that!,” said the Irish forward. “Hopefully it just puts hockey on the map. It’s obviously not a huge sport back home and we struggle to get funding.

“We’re just trying to change the game and get more funding. We don’t have a national stadium. Obviously we pay to play.”

The critical difference between hockey and other Irish sports, which hope to qualify for the Tokyo Olympic Games in 2020 is that, while all the sports in general are funded by Sport Ireland, players on the Irish women’s hockey team are not part of the individual carding system.

Minister for Sport Shane Ross yesterday announced at Dublin Airport, when the team touched down, that an additional €1.5million was being allocated to high performance teams. However, the sum was not broken down, so it is unclear how the women hockey players will benefit.

The Irish carding system is designed to give money directly to athletes so they can live and train as closely as possible to professional levels. The scheme is constantly evolving and changing as some athletes perform at major championships and others do not and so move up and down the funding ladder. But there are anomalies and hockey is not even on the carding ladder.

Shane Ryan, who swam to an impressive 50-metre backstroke bronze medal in the European Championships in Glasgow on Saturday, deservedly received €20,000 this year from the State as a world-class athlete. Mona McSharry, another talented swimmer from Sligo, is on the same figure as is top athlete Ciara Mageean.

Rower Sanita Puspure receives €20,000 while the inimitable O’Donovan brothers Paul and Gary get the top carding grant of €40,000 as podium athletes.

Stephanie Meadow, a professional golfer who according to the LPGA has career earnings of €92,803, received €20,000 as part of the Team Ireland 2018 Golf Grants.

Women’s sport is growing and growing. You have to pinch yourself to realise that you are part of that

It is important to note the distinction between money going into a federation for the sport and an entirely different stream of funding going directly to athletes.

None of the World Cup final hockey players are named on the carding scheme list and so don’t receive funding directly through the scheme.

Sport Ireland did allocate €45,000 into hockey pool funding this year but no individual hockey players were listed.

Were the World Cup finalists individual athletes from sports such as rowing, sailing, athletics or boxing the achievement of London would place them in the podium category of the carding scheme and in line for €40,000 per athlete.

It’s a bone of contention but the Irish players are also pleased to be part of a driving force among women in sport. Role models. They will take that.

“Women’s sport is growing and growing. You have to pinch yourself to realise that you are part of that,” added the UCD law graduate Dukes.

“The GAA... Croke Park getting more people last year [a record 46,286 attended the All-Ireland Ladies football final between Dublin and Mayo]. To think that we are a part of this and driving the bandwagon is pretty special. Hopefully we keep pushing on and increase the level of interest.”

Women’s hockey now finds itself at the leading edge for team sports that have traditionally struggled to get large groups of players up to elite level. The Irish squad do not want London 2018 it to become an historical aberration.

“This started back in September,” added Duke. “After last summer, we were pretty disappointed with our European campaign. We just decided to set a culture and we really said that this was our opportunity to go and do something special. It’s really changed for us, particularly with the qualification for Tokyo.

“If we can get into the top 10 in the world, we could get a home draw. We just need to build and build on this. Hopefully all of the media attention and home support will help drive it on next season.

“We need more contact time. We have to keep training. You can’t be satisfied with this. It’s funny, you might think this is as good as it gets. But we want Tokyo. We want to go and qualify for that and then hopefully medal at that if possible.

“It’s just so important that we push on here and don’t sit back and just enjoy it.”