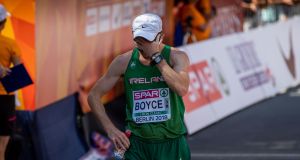 “Horrendous, traumatic, brutal at the best of times, technically his worst ever”. . . and still Brendan Boyce is taking something positive out of it. This is why some people will never fully get the 50km race walk.

There is no event either which you can start watching over breakfast, then slip west to the Olympic Stadium for some track and field heats, and still head back to Breitscheidplatz Square in central Berlin in ample time for the finish: there, after hanging with the lead group of around half a dozen athletes for the first 30km, Boyce eventually crossed the line in 19th place, clocking 4:02:14 for the 50km, or just over 31 miles in old money.

On the opening morning of the European Athletics Championships in Berlin, by then it was already past midday and the heat beyond simmering, only for Boyce, the 31-year-old trained by Rob Heffernan, there was still some reward: a training related stress fracture in his shin, sustained in Italy back in June, meant getting to Berlin was already a race of another sort.

“I’ve only been back race walking for three weeks, after six weeks of cross training,” he says, still rubbing the dried salty sweat from his eyes. “Even getting to the start line was against medical advice, and I know there were a lot of worried people on the sideline, worried was I going to finish. My leg actually held up ok.

“Even if I went out conservative, I was still going to suffer in the last 15km. So better than go easy and dying, I may as well have a pop, and gain some experience on the way. Even if you’re 100 per cent the 50km is never a given, and I needed to take something positive out of this race. Rather than just go off, die, and it all being negative.”

Victory went to the young Ukrainian Maryan Zakalnytskyy in 3:46:32, just over two minutes quicker that Boyce’s best. For the Donegal native, 16th in Zurich four years ago, putting himself into a medal position was a priority.

“I know I was going to struggle in the last 15km, no matter what. So the tactic was to go as hard as I could, for as long as I could. Training with Rob the last few years, and everything he’s done for me, I feel like I’m a medal contender in my head. Even at 30km, no one was especially ahead of me, and I think if I was 100 per cent that would I’d be in mix, and that’s something to bring forward.”

At 31, Boyce already has an an eye on Tokyo 2020: “Both my groins and my calf muscles had seized, and looking at other athletes, pulling up, getting sick, but I didn’t come here to not finish. Overall I was happy with 16th four years ago, but this gives me something going forward, getting into the lead group, hopefully for 50km the next time.”

Earlier, back at the Olympic Stadium, three of the younger and less experienced Irish athletes got there opening chance on this stage.

At age 20, Chris O’Donnell was the third youngest man in the 400m, and raised his best performance of the season, clocking 46.81 out of lane one - sixth place not enough to qualify, but an invaluable experience nonetheless.

“I’m going to come on leaps and bounds from here, no doubt about it,” he reckons. “I’m very lucky to be given the chance, but this is the day I begin my senior time. The standard is incredible, I’m happy with my race, and still the relay the come.”

In the women’s 800m heats, Claire Mooney went for broke, leading around the final bend, only to fade to seventh in 2:04.26. Síofra Cléirigh Büttner ran a little more astute and sixth 2:02.80. Neither of which was good enough to make the semi-finals.

All eyes now turn to the evening session, where Thomas Barr goes in the third semi-final of the men’s 400m hurdles (from 6.45pm Irish time), while Phil Healy will look for something special in her 100m semi-final (6:05). Stephen Scullion from Clonliffe Harriers also goes in the 10,000m final at 7:20.