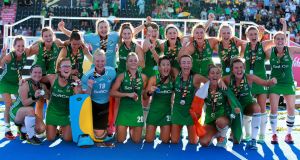 Ireland women have moved up the world rankings from 16th to eighth after their journey to the World Cup final. Photograph: Sean Dempsey/EPA

The Irish women’s hockey team have jumped eight places in their world rankings according to the revised International Hockey Federation (FIH) world table.

Ireland went into the recent World Cup in London ranked 16 in the world and following unprecedented success in winning quarter-final and semi-final matches to reach the final have risen eight places to secure their highest-ever ranking at world level.

Now above China, Korea, India, USA and Belgium, the higher place on the world ladder will improve the team’s chances of qualifying for the Tokyo Olympic Games in 2020.

In a complex Olympic qualifying system the eighth placing means that Ireland are likely to play one of the crucial qualifying legs at home. A ranking of 16 would have placed them anywhere in the world.

“We’re well capable now of qualifying for Tokyo,” said Irish coach Graham Shaw. “The rankings will put us in a really strong position to do so.”