LeBron James the latest black athlete to be attacked by Trump

Speaking at a rally in US President Donald Trump labelled NFL players who disrespect the American flag a 'son of a bitch'. 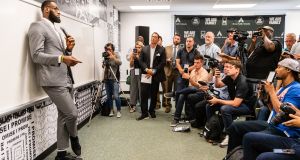 LeBron James speaks to the media at the opening of the I Promise School initiative. Photograph: Jason Miller/Getty

So we have more evidence that a master of the dog whistle occupies the White House and that black athletes are a favourite target.

The president, Donald J. Trump, took out after LeBron James last Friday in a way that felt instinctive, as the hound dog pursues the hare. The NBA star had criticized Trump, in measured tones, in an interview with CNN last week. When the anchor Don Lemon asked James what he would say if he were sitting across from Trump, James offered a thin smile.

“I would never sit across from him,” he said.

At 11:37 Friday night, after the interview had been rebroadcast, Trump replied with one of those tweets that offer an X-ray of his ego, psyche and soul. “LeBron James was just interviewed by the dumbest man on television, Don Lemon. He made LeBron look smart, which isn’t easy to do. I like Mike!”

There was a breathtaking quality to this attack, and not just because white men demeaning the intelligence of black people is one of the oldest and ugliest tropes in US history.

James had appeared on CNN not to criticize this thin-skinned and choleric president but to talk of growing up poor with a single mom and of trying to pay back those who helped him by underwriting a public, noncharter school for at-risk youth in his hometown, Akron, Ohio. His foundation also committed tens of millions of dollars to help provide college scholarships for Akron public school graduates.

James will give every child in this school a bike and a helmet. He is a biking enthusiast for reasons that extend beyond cardiovascular benefit: From James’ earliest childhood days, when he lived in a tiny apartment just up an embankment from Cuyahoga Valley railroad tracks, the bike stood as a symbol of freedom. It allowed him to pedal out of his down-at-the-heels neighborhood and explore a larger world.

You wonder how Trump could listen to James saying all of this and take away nothing but offense and pique. Then again, it’s difficult to know where the line between genuine annoyance and political calculation stands for a man who so willfully stirs the coals of class and racial resentment.

Some of my colleagues in the news media seem at pains to avoid detecting a whiff of race-baiting in Trump’s attacks. They cite examples of his attacking the intelligence and demeanor of whites, and his insistent and at times panicky assertions of his own great intelligence.

OK, sure. We cannot read any man’s mind.

It is important as well not to take on the role of yogis, bending so far backward that we pitch into outright credulity. Time and again, this president has questioned black intelligence. And from the former NFL quarterback Colin Kaepernick to the transcendent point guard Stephen Curry, Trump seems to especially enjoy picking public fights with black athletes. Last year he journeyed to Alabama, a place with a historical valise of racial baggage, and offered advice to NFL owners on handling those players who take a knee during the national anthem, players who were largely African-Americans protesting police violence and economic inequality: “Get that son of a bitch off the field right now, he’s fired. He’s fired!”

He mocked those same owners, most of them white, for going soft on the question of concussions and player brain damage: “Uh-oh, got a little ding on the head?”

In a curious and perhaps subconscious way, that circles back to Trump’s attacks on black intelligence. All of this finds a root in American history and culture. The eminent Stanford University historian George M. Fredrickson wrote a groundbreaking book, “The Black Image in the White Mind,” in which he documented the white obsession during the 19th and early 20th centuries with measuring the supposedly deficient size of black brains, the better to undergird “scientific racism.”

It has been salutary to watch black athletes and a smaller number of their white comrades show a keen awareness of the larger world, and speak up on matters of politics and culture.

As Trump has attacked black athletes, they have almost as often poked back at him. Last fall, when Curry said he might not attend a ceremony at the White House for the champion Golden State Warriors, Trump ripped Curry and disinvited the team. James, in turn, jumped to the defence of Curry, referring to Trump as “u bum” in a tweet. As athletes find their voice, it’s fair enough for politicians to take issue with their views. Trump’s default, however, is not to engage but to demean.

It speaks well of his wife, Melania, that she recognized James’ CNN interview and his generosity for what it was and praised the player in a statement Saturday. She spoke of her desire to visit his I Promise school.

As for the president, he attended another political rally in Ohio on Saturday. This time he skipped over James. Maybe he understood that this man is a figure of admiration, even for many white Ohioans, and that another savaging could backfire. Then again, who knows?

Perhaps we should just count ourselves lucky that the president stanched his bile for one hot evening in Ohio.