Dan Martin: “Pepper spray in a race is a bit too far” 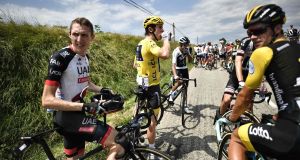 Ireland’s Daniel Martin and Great Britain’s Geraint Thomas, wearing the overall leader’s yellow jersey, wait for the race to resume. The race was halted for several minutes after tear gas was used as protesting farmers attempted to block the route. Photograph: Getty Images

Although Tuesday’s stage of the Tour de France featured plenty of climbing and gave a platform to the overall contenders to attack and try to reshuffle the general classification, it proved far less decisive than anticipated. While there was plenty of racing in the breakaway group, there were very few gaps amongst the race’s big names and, at the finish in Bagnères de Luchon, they all finished in the same group.

Ireland’s Dan Martin was in this bunch, eight minutes and 52 seconds behind the solo winner Julian Alaphilippe (QuickStep Floors). The Frenchman was part of a big breakaway which went clear over 100 kilometres from the end of the stage, and which stayed clear until the finish.

The strangest moment of the stage was the pepper spray used by police against protesting farmers which ended up affecting some of the riders and, indeed, some of the police. “I’m always open to new experiences, but pepper spray in a race is a bit too far,” said Martin, who was himself affected but fortunately not badly. “They dealt with it pretty well and the medical team got to the guys that needed attention, but it was bizarre.”

Martin remains tenth overall, six minutes and 54 seconds off the race leader Geraint Thomas (Team Sky). Next up is an experimental stage which is far shorter than usual days on the Tour and which will also see the riders gridded as per their overall position. It is expected to produce flat-out racing and could suit Martin.

“It’s only 65 kilometres but on this terrain that could be 3 hours,” he said, exaggerating slightly as to how much the mountains could slow the racing. “I’m excited - it’s innovative and it’s new.”