Thomas still the main man after dramatic day in the mountains 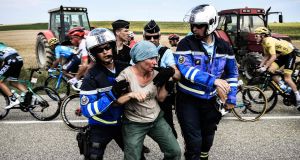 Gendarmes detain a protester as Geraint Thomas, wearing the overall leader’s yellow jersey, and the pack ride behind. The race was halted for several minutes on after tear gas was used as protesting farmers attempted to block the route. Photograph: Getty Images 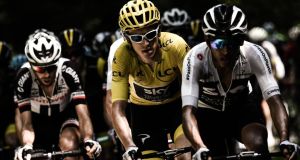 Geraint Thomas retained the yellow jersey after a late crash deprived Adam Yates a shot at a stage victory in the Tour de France.

It was a dramatic end to a stage which had been stopped at one point as riders were affected by a spray used by police to break up a farmers’ protest on the road from Carcassonne.

Mitchelton-Scott’s Yates led on the descent into Bagneres-de-Luchon after attacking three kilometres before the summit of the Col du Portillon, cresting the mountain with a 22-second advantage.

But the 25-year-old crashed with 6.5km to go, allowing Quick-Step Floors’ Julian Alaphilippe to zip by and take his second stage win of this Tour.

Yates was quickly back on his bike, and followed home Bahrain-Merida’s Gorka Izagirre to finish third.

The main contenders crossed the line in a group some nine minutes after Alaphilippe to mean there is no change at the top of the general classification.

Team Sky’s Geraint Thomas continues to lead by one minute and 39 seconds from team-mate Chris Froome, with Team Sunweb’s Tom Dumoulin a further 11 seconds behind.

Several riders, including Thomas and Froome, needed treatment after being affected by a spray used by police to break up a farmers’ protest early in the stage.

The protestors had rolled large hay bales into the road 29 kilometres into the 218km stage, and then clashed with police who tried to remove them.

After a spray was used by officers, it appeared to get into the eyes of several riders, with world champion Peter Sagan also among those affected.

The race was stopped completely while they received medical attention and washed their eyes. After a 15-minute interval the race resumed with a short neutralised section before the flag was dropped once again 33km into the stage.

Farmers’ protests are nothing new at the Tour, but the incident will add to the intense security situation in this year’s edition.

Froome was jostled and spat at on Alpe d’Huez, while 2014 winner Vincenzo Nibali saw his race ended after he was brought down in a tangle with a fan on the same mountain.