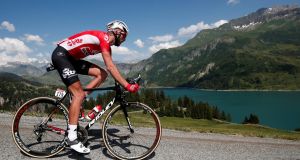 Dan Martin had another strong performance on stage 11 of the Tour de France, coming in sixth after the uphill finish at La Rosière and jumping up from 17th to 10th overall.

He was initially distanced when the general classification riders started attacking on the day’s final climb, but steadily rode back into contention and then attacked hard.

Stage winner Geraint Thomas (Team Sky) had already made his move by that point, and several others were already clear from an earlier attack. Martin’s surge was too much, however, for many of the overall contenders, although defending Tour champion Chris Froome was able to go with him.

“I saw that they had stopped and I was coming up behind, so I thought why not give it a go,” Martin explained. “I knew on that last 4km that everyone would be looking at each other and if you could get a gap it could stay.”

He did most of the work in chasing those further ahead, but Froome did do some riding before jumping clear inside the final 2km. “I was really grateful to Chris for riding with me, as I knew with G [Froome’s team-mate Geraint Thomas] up front he didn’t need to. But, damn, he was strong and he was killing me . . . I was pretty tired at the end there, but considering how I felt, it was a pretty good operation.

“After the [stage seven] crash I wasn’t really thinking about the GC [general classification], just trying to do my best every day. I just love racing in the mountains. The last few days haven’t felt like racing as I have enjoyed it so much. It’s a shame that I enjoy something that hurts like hell. Racing on this mountain with this crowd – there is no feeling like it,” Martin said.

“This Tour is going to be about who has the least-bad bad days,” he said. “If I haven’t had the crash I would be a lot better off by now.”