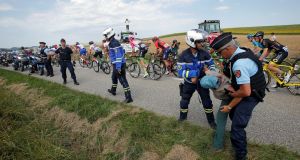 Police officers carry a protester off the road as the peloton passes during the 16th stage of the Tour de France. Photo: Stephane Mahe/Reuters

Yellow jersey Geraint Thomas and world champion Peter Sagan were among a number of Tour de France riders affected by a spray used by police to break up a farmers’ protest which caused stage 16 of the race to be stopped.

Farmers rolled large hay bales into the road 29 kilometres into Tuesday’s stage from Carcassonne to Bagneres-de-Luchon.

Police then used a spray to tackle some of the protesters as the race approached, and it appeared to get into the eyes of a number of riders.

Team Sky’s Thomas was seen wiping his eyes while Sagan used his water bottles to wash his eyes.

The race was stopped completely while several riders received medical treatment from the doctor’s car at the rear of the peloton.

After a 15-minute interval, the race resumed with a short neutralised section before the flag was dropped once more with 33km of the 218km distance covered.

Farmers’ protests are nothing new at the Tour, but the incident will add to the intense security situation in this year’s edition.

Team Sky’s Chris Froome was jostled and spat at on Alpe d’Huez, while 2014 winner Vincenzo Nibali saw his race ended after he was brought down in a tangle with a fan on the same mountain.

Tuesday’s stage takes the race into the Pyrenees for the first time as the final week begins, with Thomas looking to hold on to a lead of one minute and 39 seconds over team-mate Froome, with Team Sunweb’s Tom Dumoulin a further 11 seconds back.