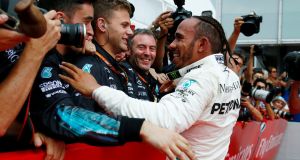 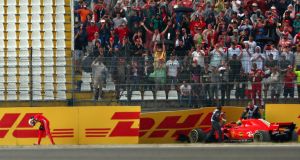 Sebastian Vettel walks away from his Mercedes after crashing suring the German Grand Prix at Hockenheim. Photograph: Dan Istitene/Getty Images

Lewis Hamilton won the German Grand Prix with a remarkable and unlikely victory from 14th on the grid, his superb recovery aided when his championship rival Sebastian Vettel crashed while leading the race.

Hamilton’s Mercedes team-mate Valtteri Bottas was in second in front of the Ferrari of Kimi Raikkonen. The win for Hamilton means he has now retaken the lead of championship from Vettel, with a 17-point advantage, the sixth time the lead has changed hands this season.

Hamilton’s victory was placed in doubt after he was summoned to appear before the stewards on Sunday evening – but the Mercedes driver only received a reprimand and held onto the race victory. Hamilton was alleged to have crossed the pit-entry line when he decided not to pit for tyres under the safety car.

It is the first time in his F1 career that he has won from lower than sixth on the grid and would have far exceeded his expectations after a mechanical failure in qualifying saw him starting in the midfield.

Mercedes had stuck to their strategy of keeping Hamilton out long but the crucial moments came when it rained in the final third and Vettel lost grip and went off. Vettel apologised to his team but was left slamming his steering wheel in frustration at his error, with the win and his championship lead gone.

It is Hamilton’s fourth win at the German Grand Prix, matching Michael Schumacher as the most successful driver at the race. Hamilton has won three times here and once at the Nürburgring. The record will be of little import, however, compared to his elation at coming back from what had appeared to be a lost cause when his car suffered a hydraulic failure in qualifying.

This 66th career win is his fourth of the season, equalling Vettel and once again making the title fight impossible to call. After disappointment in claiming only second at the last round in Silverstone, he and the team will be buoyed by an unlikely victory and a one-two. Hamilton was pushed to the limit to take the win but if indeed it is tiny margins that are likely to decide the title this season, this is one of the moments that may make all the difference.

It had for so long looked to be in Vettel’s hands. He made a clean start from pole and held his lead into turn one and immediately put some distance on Bottas in second, out of DRS range by the third lap. Hamilton had made it to 12th by lap two and promptly went one better and breezed through up the inside of Fernando Alonso and with Charles Leclerc the next to fall he was in the points by lap four but already 16 seconds back from Vettel.

Hamilton had started on the harder, soft tyres and made short work of the slower midfield cars but progress proved slightly slower when he came up to the Haas, Force India and Renault entries. But he persevered and had made it to eighth by lap eight.

Kevin Magnussen’s Haas was the final midfielder to fall and he moved up to fifth on lap 14, 16 seconds behind Max Verstappen in fourth. Raikkonen, however, had pitted early, opting for a two-stop which brought the Finn out just in front of Hamilton. Vettel, in the meantime, was in control out front maintaining a solid three-second gap to Bottas. Raikkonen had good pace on his fresh rubber and Hamilton matched him and when Vettel pitted on lap 26 he emerged behind his team-mate and just in front of Hamilton.

With the leaders having all pitted, Hamilton stayed out. However Vettel was suffering running in the dirty air behind Raikkonen and Ferrari could have been more ruthless in switching their drivers, given they were on different strategies. They finally ordered Raikkonen to move over on lap 39 but he had lost time and given his rubber a hammering.

Mercedes had to pit Hamilton on lap 42 and he took the fastest ultrasoft rubber to run to the end, they had kept him out as long as possible hoping to take advantage of anticipated rain which duly arrived only a lap after he had stopped. Hamilton was 20 seconds back from Vettel but was gaining between one and two seconds a lap, with the localised rain at turn six not enough to use wet tyres, his rubber was the best on the track.

But the rain was shifting across the track and making for a difficult greasy surface. It proved too much for Vettel who was locking up and unable to find the grip to turn in, went straight on at turn 13, ending his race in the barriers.

The safety car was deployed and, with Bottas and Raikkonen both pitting, Hamilton stayed out and then inherited the lead with 14 laps to go. When racing resumed on lap 58 crucially the rain was abating and the track drying.

Hamilton made the most of his advantage, although under a fierce attack from his team-mate who was subsequently ordered by the team to hold station. He had done enough and held his place to the flag.

Verstappen finished in fourth, with the Renault of Nico Hulkenberg in fifth. Romain Grosjean in the Haas was in sixth in front of the Force India’s of Sergio Pérez and Esteban Ocon. Marcus Ericsson in the Sauber was in ninth with Brendon Hartley in the Toro Rosso in 10th. - Guardian service