Trump says players who kneel ‘shouldn’t be in the country’ 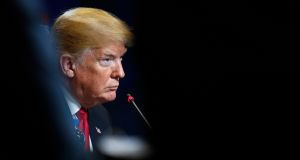 US president Donald Trump has been angered by players kneeling for the national anthem. Photograph: Tom Brenner/The New York Times

US president Donald Trump welcomed the National Football League’s decision to fine teams if players on the field refuse to stand for the national anthem, saying in an interview broadcast on Thursday that if they don’t want to stand maybe they should not be in the country.

Some NFL players had begun kneeling during the anthem to protest police shootings of unarmed black men, provoking a controversy as Trump criticised the players for being unpatriotic and repeatedly demanded an end to such protests last year.

NFL Commissioner Roger Goodell announced on Wednesday a new policy that will fine teams if players on the field fail to stand during the “Star-Spangled Banner.” Players who choose not to stand may remain in the locker room until after the anthem is finished.

“I think that’s good. I don’t think people should be staying in locker rooms but still I think it’s good,” Trump told Fox News in an interview taped on Wednesday.