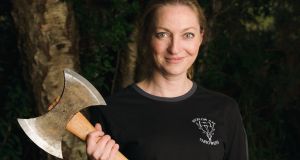 Oonagh McMorrow talks about axe throwing with an evangelical zeal, the Wicklow woman’s enthusiasm unbounded for the sport she took up early last year after her husband had given her a rather unorthodox treat for her birthday: a visit to his axe throwing club.

Leigh Standing was confident his wife would develop much the same passion for the sport as he has done since attending the inaugural meeting of the Wicklow Axe Throwers about 18 months ago. He wasn’t wrong.

What do you love about it? “You get a wonderful, warm sensation inside when you throw the axe, whether you hit the target or not – but it’s even better if you do. It’s like a complete stress release. It’s a bit like a men’s shed for everyone. People find that they start to have chats while they’re throwing axes, sorting through all the stuff going on in their day-to-day lives. Everything is just thrown away and dealt with. It hits you almost in the gut when you throw it.”

Happily not literally, McMorrow insisting that the sport is perfectly safe, so much so her three children – “nearly eight, 11 and 15” – all take part. No worries here about putting sharp objects in kids’ hands. “They love it, and all their friends come around to join in. But with kids you have to be very strict, you tell them the rules and if they don’t obey them they can’t come and do it again.”

But back to the benefits of axe throwing. It is, says McMorrow, therapeutic. “It really, really is. And so many people who turn up and enjoy it say ‘I’ve found my tribe’. You really feel like you’re part of a family.”

This will, of course, come as news to the uninitiated who might have thought axe throwing was just something lumberjacks did to pass the time between felling trees. And that’s pretty much how McMorrow previously viewed the sport, which is most popular in Canada, the United States and Scandinavia.

But she is now one of five women to have joined the Wicklow Axe Throwers, the club’s membership tripling to 20 since that first meeting, with another 20 regular visitors from around the country. So far it’s the only club in Ireland, but McMorrow is hopeful that more will be set up.

A simple sport it is too. You just throw your axe at an archery-like target from a distance of 21 feet (“it’s like the cross section of a tree trunk”), ideally hitting the two-inch bullseye, for which you score five, with four, three, two and one points for the outer rings.

But you don’t just throw any old axe. Two Swedish companies and one in New Zealand make the top of the range throwing axes which start at about €130. “They’re amazed that from selling nothing to Ireland they’re suddenly selling 20, 40 axes in the last year.”

You don’t, says McMorrow, need to be super fit to throw axes, but it’s a help if you build up your “core strength”. “You can do squats and weights for that. I’ve started CrossFit simply because I want to build my core strength and target certain muscles like my triceps. I’m in my 40s now, I’ve had three children, I hadn’t really done any sports for years, but this has got me back in to it.

“Taller women who are strong and sporty tend to pick it up much quicker, but people of any size can do it. I’m quite small, I’m only five foot three, so initially I struggled to throw the heavier axes so I used a slightly lighter New Zealand axe which I imported. But I’ve since moved on to throwing the same axe as all the rest of them. It’s as much about the timing and balance as it is about the throwing. It’s about getting your body working almost like a pendulum.”

And even though she and her clubmates, among them Heath Dawson, Ashley Glover, Kelly Lynch and Anna-Marie Leonard, are relatively new to the sport, they’ve done well at competitions in Germany and the UK and at the Nordic Championships.

“We were rubbish compared to the Swedes, they were astonishingly good. They had people from their 30s up to their 80s throwing – tiny little old men and women throwing an axe like it’s nothing. But I reached the semi-finals and learned an awful lot. Best of all was that the Irish did what they normally do: chatted to everybody, partied and danced, had a great time. Axe throwing traditionally was quite a serious sport in Europe, countries would turn up, throw and go home. At the end of it some of the Germans and Swedes said ‘axe throwing competitions are never going to be the same again – you Irish have shown us how to have fun’. They just saw us as a breath of fresh air.”

Next in the schedule is the Irish Open in Greenan Maze in July, with 70 entrants having registered so far from both Ireland and abroad. And then there’s the Canadian Open in Nova Scotia at the end of August, in which McMorrow will compete. (Nova Scotia being the home of an indoor axe throwing bar called Timber Lounge, its target market including hen and stag parties who are promised an “axetraordinary” night. Beer and axes. What could go wrong?).

An obvious enough question: do you have trouble getting your axes on flights? “We don’t really,” she says. “When we travel abroad we tend to wear our team gear so they don’t think we’re just a bunch of weirdos bringing axes on to the plane. You just tell them before the X-ray that there’s an axe in your suitcase.” In Scandinavian airports in particular, they don’t blink, she says, axe throwing, after all, not being an uncommon activity in that part of the world.

A routine swab on Leigh, though, when he was returning home from Sweden did raise some alarm. “They said ‘we need to chat with you’. His hands and baggage had come up positive for explosives. He said the only thing he could think of was that he shook hands that morning with some Norwegian bear hunters and that maybe gunpowder on their hands had transferred to him. So the airport people just said, ‘ah, that’ll be it, on you go!’”

Just another day in the life of an axe thrower. A sporting tribe like no other.