What lies beneath Mo versus Haile? The truths they can’t disguise

Athletics: The number of banned Kenyans is not just a trickle – it is a steady flow 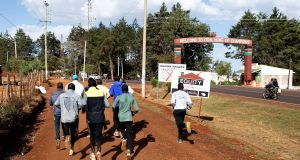 A group of runners taking part in a training session on March 13th, 2019, in Iten, Kenya. Photograph: Getty Images

The arched signs are presumably still there, hanging over the only road that runs in and out of the small village that is perched at 7,875ft on the western escarpment of the Great Rift Valley. The Kenyan flag painted down each side, six words written across the top in large white capital letters. Welcome to Iten – Home of Champions.

It’s no exaggeration. No village on earth – or, indeed, country for that matter – could claim to have produced more distance running champions than Iten. World or Olympic, take your pick.

And when you’re running on what seems like the edge of the world, and the sunrise splits the landscape into a kaleidoscope of bottle-green fields and tangerine-tinted tracks it’s not just the sound of your own breathlessness that catches you first.

It’s the sound of children running from the bushes and mud huts on their way to school, aged maybe four or five, laughing, hardly breathing at all. Perhaps one of those future champions right there, running alongside you, so wondrously innocent and all.

And among the reasons why many such small villages in Kenya and Ethiopia became a sort of Mecca for elite distance runners from around the world, some looking for answers, others maybe some secrets.

How are the Kenyans repeatedly raising the standards and limits of human endurance? Why is it that parts of Ethiopia have the most concentrated pockets of athletic talent on planet earth?

That was seven years ago already, my first but not necessarily lasting impression of six weeks training in Ethiopia and Kenya before running the 2012 London Marathon. It’s not that the altitude training didn’t exactly pay off as planned; it’s that every time another Kenyan or Ethiopian champion fails a drugs test so too fails all that wondrous innocence.

It began in Addis Abba, at the Great Ethiopian Run, with 36,000 others singing, chanting, dancing for 10km, then an invitation into the home of Haile Gebrselassie and an open display of his Olympic and World Championship gold medals and evidence of the 27 world records he had set.

From there to Iten, and the high altitude training centre where Mo Farah often credited his first extended stay in 2010 as the most important reason for him going from world and Olympic contender to World and Olympic champion 10 times over; plus the move soon after to Alberto Salazar and the Nike Oregon Project.

That Farah now prefers the high altitudes of Ethiopia over Kenya may simply be a matter of taste, but what is certain is that outside of Russia these are the two countries with the worst reputation in the world when it comes to anti-doping, including the enforcing of it.

In Kenya it has reached the point of near apathy, evidenced by the four-year ban handed down last week to former Olympic and three-time World 1,500m champion Asbel Kiprop, the long-term Iten resident who first tested positive for EPO in November 2017.

Kiprop tried every trick in the book in get off – the tip-off, pay-off, etc – but instead joins the long list of failed Kenyan athletes: 138 at least since 2004, most of those coming in the last five years.

That’s not suggesting any connections: unless perhaps with the case of Jemima Sumgong, the 2016 Olympic marathon champion who in January had her doping ban doubled to eight years after her claims that she was injected with EPO by an “imposter” at a Kenyan hospital during a doctor’s strike were dismissed; in February, Sarah Chepchirchir, Sumgong’s sister-in-law and training partner, was also provisionally suspended for an anti-doping violation.

There’s a range of others – World 800m bronze medallist Kipyegon Bett and three-time Boston Marathon champion Rita Jeptoo also on that list of banned Kenyans. This is not a trickle; this is a steady flow.

Across the border in Ethiopia anti-doping is desperately random (in 2016 testing was only carried out between April and August). Two years ago a joint investigation by the Guardian, German broadcaster ARD and Holland Media Combination showed just how easy it was to obtain doping products in Addis Abba, often within sight of the national stadium.

In the space of 26 minutes nine phials of EPO were purchased at a cost of 2,430 birr (€90). A sticker on the reverse of the glass container stated they should be dispensed on the prescription of a physician only. Only no questions were asked, no prescriptions were sought.

Again nothing to connect or even suggest this has anything to do with Farah’s preference for training in the remotely high villages of Ethiopia, such as the Yaya Village Resort in Sululta, north of Addis Ababa, owned by Gebrselassie.

Yet this is what lies beneath nonetheless: a part of the world where a proper anti-doping programme is conspicuous by the lack of it, and where not much can be trusted anymore when it comes to distance running.

If Farah somehow figured this would be overlooked when opening his madly curious case against Gebrselassie this week, ahead of him running Sunday’s London Marathon he may need to hire a better PR company.

The initial bickering may have been over what exact amount of cash and phones and watch were stolen and who threw the first punch in an alleged gym incident, but once Gebrselassie hit back with the further allegation that Farah has held a two-year “grudge” since Gebrselassie denied Jama Aden access to the Yaya Village Resort things were always going to get properly dirty.

According to Gebrselassie, who at the time in the autumn of 2016 had taken over the presidency of the Ethiopian Athletics Federation, and had been trying to make doping a criminal offence in order to help clean up Ethiopia, Farah was looking for Aden to stay at the resort despite the allegation that Aden was caught earlier in 2016 at his then training hotel in Sabadell, Spain, with a range of banned substances. That case in Spain continues. Aden these days is working with athletes in Qatar.

Farah or else Gebrselassie must be fabricating some part of their story, only for Farah the original task of trying to beat Kipchoge in London on Sunday suddenly appears far greater than what lies beneath.

Where there is little wonder or innocence anymore.