Pressure builds up for Tokyo as Laser crews converge in Portugal 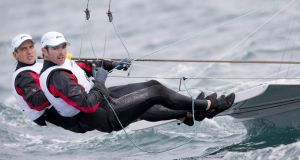 Campaigning towards Tokyo 2020 steps up a gear this week as the single-handed men and women of the Laser class hold their European Championships in Portugal.

Following the equivalent 49er skiff championships at Weymouth the previous week, the full Irish squad will have completed benchmark regattas as pressure builds for qualification for the next Olympics.

Ireland competes in four of the 10 Olympic sailing disciplines: single-handed dinghy and double-handed skiff events for men and women.

With six months remaining to the 49er world championships and the next opportunity to qualify for the games, time remains for the leading Irish crews to up their game.

Just six nation places are left to be assigned at the worlds; none of the Irish crews achieved a Gold fleet result at Weymouth.

“If you want an insight into how tough qualification is, just look at the 49er class. The depth is phenomenal,” said James O’Callaghan, Irish Sailing’s performance director. “We always said we wanted competition in the class and that’s what we have between the up-and-coming crew and the senior helm.”

Having narrowly missed qualifying Ireland at the first opportunity at the Hempel World Sailing Championships in Aarhus last August, Lynch’s form has been transformed since the start of the year.

He has consistently achieved top 10 results in every major regatta since January, at times leading events and marking himself as a real contender in the class. Ranked 15th in the world, his trajectory is as good as it gets.

However, despite opening the Europeans this week in joint first place on the first day, a slip in form leaves him in 13th overall out of 102 boats at the conclusion of the qualification round that decides the Gold, Silver and Bronze fleet splits.

The next Tokyo qualifying event is the Laser World Championships in Japan in July.

For good measure, Lynch has company in the Gold fleet from Howth’s Ewan McMahon, the rising star of the Irish class who has been equally consistent this season and placed strongly in the top half of the Gold fleet results.

McMahon’s younger brother Jamie and sister Eve have both been confirmed for the Hempel Youth World Championships in Poland, the first time siblings have been included on an Irish Sailing squad for this event.

The pair will each sail in the Laser Radial class and join Rian Geraghty-McDonnell with Nathan van Steenberge and Leah Rickard with Eimer McMorrow Moriarty, the 29er skiff class representatives on the national team in July.

Meanwhile, the Laser dinghy and class organisation have been under the spotlight recently as equipment selection for the Paris 2024 Olympics proceeds. The class association is currently in dispute with one of the largest builders of the dinghy and World Sailing has made selection of the class for Paris conditional on the dispute being resolved this summer.

The world governing body has also started to progress equipment selection for the new event – a double-handed, mixed offshore event – that has proven to be a contentious decision.

However, inclusion of the new event should be attractive for Irish Sailing given Ireland’s strong interest and relatively strong pedigree in this department of the sport.

Moreover, inclusion of offshore racing would help bridge the gap between the elite Olympic niche and the bulk of the sport that participates in cruiser-racing.

That will certainly be a talking-point at the forthcoming Irish Cruiser Racing Association national championships being hosted by the Royal St George Yacht Club in Dún Laoghaire on June 7th, 8th and 9th. Deadline for entries closes next week.

1 England v Ireland preview: Ireland’s revival to face its sternest test
2 Ireland Slam England at the Gardens to open up Grand ambitions
3 Irish pack must expose the weakness in England’s backrow
4 Keeping Donegal on the road to success a costly business
5 Matt Williams: Ireland will need to step up on Wales display to prevail at Twickers
Real news has value SUBSCRIBE