What ails the leading college of Irish athletics?

Fitzpatrick, the man behind DCU’s athletics success, should have received term extension 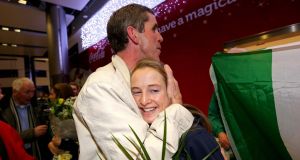 There is no such thing as the right way to finish a race, only the best way, and Infinite Tucker may well have found it. With a name like that who could forget him now?

Caught somewhere between hope and the hope not, and the gravity which might pull him through, Tucker performed the perfect Superman dive to win a college 400m hurdles race in America last Saturday – the Southeastern Conference Championships, staged in Fayetteville, Arkansas.

The race video quickly went viral, as well it might, and chances are it won’t be the last we’ve heard of Tucker: a third-year junior at Texas A&M, that city-like campus with some 70,000-strong students, he went properly flat out to beat his college team-mate Robert Grant, clocking 49.38 seconds in the process. Thomas Barr has, presumably, been practising on to water.

After finishing second last year, Tucker was intent on earning maximum points for Texas A&M, helping them secure a berth at the NCAA American collegiate track and field finals, set for Austin, Texas on June 5th-8th. It was another reminder too of how seriously competitive they take their athletics in college in America: along with football and basketball, almost all of the biggest and the richest and the most prestigious colleges consider athletics central to their sporting programme and prowess, the depth and quality of NCAA performances always reflecting that.

Back in Ireland, the college athletics scene has always been a little more fragmented and a lot less competitive, for a variety of reasons, including the lack of proper facilities. It’s why the American scholarship trail was the preferred route for most promising young Irish athletes, and in some cases still is, but if there is one mark of proper progress and a successful programme then it’s right there at Dublin City University (DCU). It was no great secret either: build it, and they will stay at home.

Here’s the score: the Irish university athletics championships were first staged at the Mardyke in Cork on May 19th, 1873, and it took until 2005 before DCU made it on to the medal-winning podium of the team competition, men or women, when they finished third. A year later they were second best overall, and since 2007 have now gone 13 years unbeaten, winning the men’s and women’s and combined team titles. It’s an exceptional streak unrivalled by any other college, even when UCD, Trinity and UCC were at their most dominant.

It’s even more impressive considering there was effectively no athletics programme in DCU two decades ago, and I know that because I was there –when the contrast with the American collegiate scene couldn’t have been more extreme. I got a reminder of that last week, with an email inviting me back to the 25th reunion of the class of ’94, at Brown University, where we had our own indoor and outdoor running track, Olympic-sized pool, etc, and once qualified for the NCAA finals. Only what ultimately made it a successful athletics programme were the coaches and the people behind it.

A year after that, in DCU, learning the ropes of journalism, there were no athletics people or facilities, and it wasn’t until 2001 that things began to change when Enda Fitzpatrick first volunteered for some part-time coaching. Then with the combined vision of Prof Niall Moyna they set up an athletics academy, with the full backing of DCU, with a similar focus on Gaelic football. If DCU was to develop a proper sporting programme it had to take success sport by sport.

Fitzpatrick, a former international 1,500m runner and sub-four minute miler, then became DCU’s full-time athletics academy director in 2005, on a secondment basis, having previously worked as a teacher in Holy Faith Secondary School in Clontarf. The speed of the success was matched by the depth of it – the range of Irish champions or Olympians to come out of DCU including Fionnuala McCormack, Linda Byrne, Mark Christie, John Coghlan, Dave McCarthy, and Fitzpatrick has since expanded his coaching team to include some of the best in the trade, including Anne Keenan-Buckley, John Shields, and Michael Lane.

When Fitzpatrick started in DCU the athletics also club had just 18 members; this season that has grown to 115, and their tally of Irish inter-varsity team titles is now at 190, including a clean sweep in the current academic year; men’s and women’s cross country, road relays, plus indoor and outdoor team titles.

Part of the DCU success could possibly be contributed to the decline of the athletics programme across the city in UCD, not helped by the digging up of their athletics track to turn it into a car park, a situation which would still be without hope were it not for the anonymous €3 million donation to build a new track, due for completion sometime next year. UCD are striving to build a stronger programme under James Nolan and the inspiration of graduates like Mark English and Ciara Mageean, only it’s still some way off the success of the 1980s.

Against that backdrop came this week’s news that Fitzpatrick will likely be finishing his role as athletics academy director, as DCU were no longer able or willing to facilitate an extension, depending on exactly how events might be interpreted.

Fitzpatrick has expressed his “hurt and disappointment” over the decision, adamant that James Galvin, the director of sports and well-being at DCU, hadn’t explored all the possibilities of a further extension to his secondment. DCU maintain the position was only ever agreed on a temporary basis, and following a recent directive from the Department of Education and Skills, no secondment extensions were being considered.

Fitzpatrick maintains that in correspondence with Holy Faith, DCU were presented with the opportunity to apply for a further extension, via the school principal Deirdre Gogarty, should both parties agree. “I’m absolutely disappointed the university would take this stance,” said Fitzpatrick, “and very much hurt about that too”.

DCU state their directive from the department was that no secondment extensions were being considered, and that they did revert “to the relevant official who reiterated that there was no change to the provisions of Circular Letter 0029/2018 and that the decision regarding the termination of Fitzpatrick’s secondment stood”.

DCU Athletics Club since set up an online petition in an effort to retain the services of Fitzpatrick, with more than 1,500 signatures since Wednesday. In response to the DCU directive on the secondment, they added: “Our fight will continue to influence the decision-makers within the university to immediately reverse this decision and allow Enda continue for the next two years until he officially retires.”

The club is planning a protest outside DCU president’s office at lunchtime on Tuesday. Something doesn’t add up when the most successful college in Irish athletics can’t seem to find some way of extending Fitzpatrick’s term, especially knowing a little about what a college in America would pay for it.

1 Kevin McStay: Maybe a knockout All-Ireland Championship is the long-term solution?
2 No further players to be called up to Ireland squad to face Georgia
3 Gerry Thornley: Ireland don’t want to box themselves into a corner
4 Former France and Stade Francais winger Dominici has died aged 48
5 Owen Doyle: Ireland suffered from officiating of the breakdown
Real news has value SUBSCRIBE