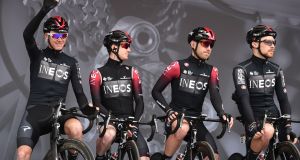 Chris Froome (left) of Team Ineos poses with teammates before the start of the first stage of the Tour de Yorkshire in Doncaster, north England. Photograph: Oli Scarff/Getty Images

Throw away your Samsung television. Burn your Primark t-shirt and jeans. Pour that six-pack of Rockshore apple cider straight down the drain, and sure go on – gobble up the last of the Denny sausages.

Such is the fraught and increasingly tortured relationship between people and planet it’s become virtually impossible to avoid some sense of guilt about every single brand of product we buy or consume. Can nothing be morally or ethically right anymore without finding some wrong?

Maybe we should all walk into the woods and live off the grid like Mark Boyle, who made for interesting viewing on Primetime on Monday night, describing life in his straw cabin on a three-acre smallholding in south Galway.

His book The Way Home: Tales from a Life Without Technology is also a sort of modern Walden; or, Life in the Wood, Henry David Thoreau’s beautifully transcendental tale from 174 years ago, when he declared his own independence, and spent the next two years in a cabin in the woods learning to “live deep and suck out all the marrow of life”, and not, “when I came to die, discover that I had not lived”.

Still this is simply not realistic for most us, and trust me, I’ve tried, the romantic ideals of Otherwhere; or, A Year in Luggala eventually worn down by pure practicality. So at best we get to live by our own rules and the rules of those around us, and can only hope they aren’t all somehow misconceived.

“Where’s the beef, you vegan?” someone heckled at Taoiseach Leo Varadkar, following the cabinet meeting in Cork on Wednesday, before Varadkar promptly clarified that he was actually an omnivore, his “problem, if anything, is I probably eat too much of everything”.

Around the same time on Wednesday, at a secret location somewhere in the Yorkshire countryside, the world’s most successful cycling team underwent what could be conceived as a gentle rebranding exercise, Team Sky morphing into Team Ineos, without any major shake-up in personnel or indeed ethos.

If anything the rebranding message, made in front of a very select media presence, is that it’s business as usual, the only notable change being the new and slightly subdued black and crimson Ineos kit.

Still, anyone digging a little deeper into the Ineos brand would quickly discover a lot of it happens to be in the digging business, as part of a range of petrochemical industries, Ineos also being Europe’s third largest producer of polyethylene and polypropylene, the two most common plastic compounds used in packaging and construction.

The chairman and CEO of Ineos is Jim Ratcliffe, Britain’s richest man, who on last count had a fortune somewhere in the region of £21 billion (€24.5 billion), and has already poured big money into the sponsorship of Ben Ainslie’s sailing team for the 2021 America’s Cup.

At age 66, Ratcliffe is also an extremely fit and active cyclist, and if he’s not lying around on his private yacht Hampshire II he’s likely to be out on his bike in the hills around Monaco, where he now spends a large part of his time.

This time last year, Team Sky came out with orca whales on the back of their jerseys, in support of Sky’s Ocean Rescue, a campaign aimed at tackling the global plastic pollution crisis. With that came some gentle accusation of sportswashing, the practice of using some good cause or publicity to wash over some controversial or questionable reputation or activity.

The gentle irony now being the sportswashing accusation is being levelled at Ineos, especially given their support of fracking, the process by which water, sand, and chemicals are pumped underground to trigger disruptions in rock formations that release shale gas.

Although permitted in England under licence, governments in Scotland, Wales and Northern Ireland still oppose fracking until further research is completed into its environmental impact; a number of countries ban the process completely, including France and Germany, given the dangers of water and air pollution, and even small earthquakes, to public health.

It’s one thing to walk away from a brand of alcohol or clothing; it’s harder to walk away from fracking if it’s happening close to where you live – although protests against the Ineos deal didn’t exactly materialise around the Tour of Yorkshire this week. Not yet anyway.

Truth is there are precious few sporting sponsorships that can be considered morally or ethically right anymore without finding some wrong – and especially in cycling. Mining firm Orica previously sponsored Mitchelton-Scott without much fuss, and oil giant Total is due to take over the Direct Energie team.

Human rights groups have also questioned the sponsorship of Gulf state teams such as Bahrain-Merida team, and starting last year’s Giro d’Italia in Israel was seen by many as blatant sportswashing over the bigger issues in that part of the world.

Even by his own occasionally brash levels of self-confidence, David Brailsford must have been mildly surprised by the speed with which Team Sky become Team Ineos – just 100 days after Sky announced the end of their 10-year deal, during which time as team principal, Brailsford, saw them win eight Grand Tours, including six Tour de France titles thanks to Bradley Wiggins, Chris Froome, and Geraint Thomas year.

Indeed that prompted Procycling magazine’s deft headline “Jim and Dave’s chemical bromance”, the expectation being Ratcliffe will pump an extra €5 million into Team Ineos each year.

Sky’s annual budget was already around €40 million, well over twice the average €16m budget of the 18 WorldTour teams, and 10 times as much as the 22 smaller UCI Continental teams, and that’s part of the concern with this deal, above or below any environmental concerns.

What the deal hasn’t washed over either is the team’s background in marginal gains and jiffy bags and emergency TUE’s, and what a British parliamentary committee found was crossing “an ethical line”. Brailsford still hasn’t fully explained those 55 doses of the performance-enhancing corticosteroid triamcinolone acquired between 2010 and 2013.

Froome’s kidney’s malfunction during stage 18 of the 2017 Vuelta, when his body contained twice the allowed amount of his asthma medication salbutamol, was partly explained by a study carried out on dogs, but in the meantime former Team Sky doctor Richard Freeman has yet to face a medical tribunal, twice postponed in recent months.

“We did our due diligence, I have absolutely no interest in cheating or drugs,” Ratcliffe told BBC Sport on Wednesday. “The day that any of that enters our world, we’ll be exiting that world.”

Which gently begs the question: exactly how deep did Ratcliffe dig into Team Sky?