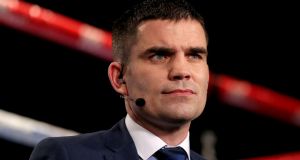 Bernard Dunne has been confirmed as the new high performance director at the Athletic Boxing Association (IABA). Photo: Ryan Byrne/Inpho

Bernard Dunne has been confirmed as the new high performance director at the Athletic Boxing Association (IABA).

The role – previously held by Billy Walsh before his move to the US – will see Dunne work with head coach Zaur Anita at the new high performance unit in the National Sports Campus in Abbotstown.

The IABA have set down the aim of ensuring Ireland is in the top three countries in terms of the number of boxers competing at the 2020 Olympic Games in Tokyo, with the ultimate goal of being the best boxing nation in the world, moving from the previous best of fifth during the time of the London 2012 Games.

Dunne, a 13-time national boxing title holder as well as a former WBA and European super bantamweight champion, has been working with the Dublin senior football team for five years as a performance and lifestyle coach.

Fergal Carruth, IABA chief executive, said: “The Rio Olympic Games were both difficult and disappointing for boxing but we are delighted that with this appointment together with the announcement of the move to the Sport Ireland Institute of our High Performance Unit that we have addressed three of the key recommendations detailed in the review conducted after the Rio Games. We are confident that Bernard and the rest of the High Performance Team are now well placed to maximise the conveyor belt of talent that exists in Irish boxing evidenced by the continued success of our youth boxers in international competition.”