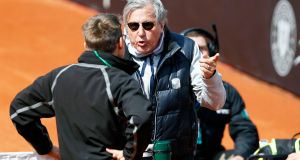 Ilie Nastase again insisted on Tuesday that he has not made any racist remarks following a controversial weekend which could result in the Romanian losing his membership of the prestigious Laureus Academy.

Romania team captain Nastase was ejected from the Fed Cup match in Constanta on Saturday following a foul-mouthed tirade directed at his British counterpart Anne Keothavong and British number one Johanna Konta.

This was after him asking for Keothavong’s room number during Friday’s press conference and being overheard making a racially insensitive “chocolate with milk” remark about world number one Serena Williams’ unborn child.

Nastase was quoted by Romanian news website news.ro on Tuesday as saying: “I didn’t make any racist remark. I don’t know what the racist remark is.

“Is it racism that I said he could come out as chocolate with milk? If I said that she would have an ugly, black (baby)? That is racism.”

Nastase also abused match officials and a British journalist and had to be escorted from the venue by security guards, only to return on Sunday and be thrown out again. Romania would eventually win the bad-tempered match 3-2.

The former world number one has been a member of the Laureus Academy, which is best known for its charitable work and annual sports awards, since its inception in 2000.

But the 70-year-old two-time grand slam champion now faces the real possibility of being kicked out of a club that describes itself as a “unique association of living sporting legends”.

In a statement, a Laureus spokesman said: “Laureus disassociates itself fully with the recent comments made by Ilie Nastase, which do not represent the spirit and ethos of what we stand for. The Laureus Academy will be discussing the matter further internally.”

The International Tennis Federation announced a provisional suspension for Nastase on Sunday, and the organisers of Wimbledon have already said they are considering whether to extend their usual invitation this summer.

Williams, whose fiance Alexis Ohanian is white, responded to Nastase’s comments via Instagram on Monday, describing them as “racist”, and said she was giving the ITF her “full support” in its ongoing investigation. She also criticised his “sexist comments against my peers”.

Nastase, however, remains completely unrepentant, and in several local and international interviews has admitted calling Keothavong and Konta “f*****g bitches” but dismissed it as his usual over-excitement during games, and indicated he was not bothered if he was invited to Wimbledon or not.

Williams, a 23-time grand slam champion, was named Laureus’ sportswoman of the year for a record third time in 2016, having also won its comeback of the year prize in 2007.

Belgium’s Fed Cup captain Dominique Monami earlier said she was not surprised by the weekend’s events, given her experience when her team travelled to Romania in February.

The 43-year-old claimed Nastase called her a “grosse conne” (“big bitch”), and was rude throughout.

Speaking to the Daily Telegraph, the 43-year-old Monami recalled how Nastase had opened a conversation by asking her how old she was, and then said: “I only go with women half my age.”

She added that during a captains’ meeting, he “only talked about himself and his book and his career — he didn’t even say hello”.

She continued: “At a certain moment (during one of the matches) he clapped before the ball had touched the ground. I said to the umpire, ‘He cannot do that’, and he called me a grosse conne (big bitch) in French.

“It went on for two more games. He wanted to have a fight. I decided, ‘Don’t think about anything but tennis, keep your emotions under control’. While he was talking, I just kept looking at the umpire and referee and saying, ‘Could you ask him to stop now? This is not the way it should be’. After those two games, he gave up because he could see I wasn’t paying attention.

“So when I read about the British tie I was not surprised, even though he went way over what he did with us. He is disrespectful about women because he can get anybody in Romania. Maybe he thinks a woman is a thing not a person.”