Russian’s presence cannot be ignored by sponsors or players, but for different reasons 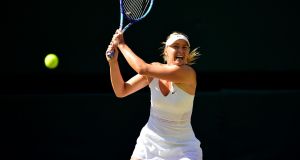 Maria Sharapova will take a giant stride towards moving on from her 15-month doping ban later today when she faces Roberta Vinci in the first round of the Porsche Grand Prix in Stuttgart. Photo: Dominic Lipinski/PA Wire

When the most marketable player in the history of women’s tennis steps on to a court in Stuttgart on Wednesday to hit competitively for the first time in 15 months – in peak, early-evening viewing time and fully four hours after the world No7 Johanna Konta – women’s tennis will hold its breath.

If Maria Sharapova, with neither ranking nor regrets for the actions that led to her absence, can advance to the second round of this tournament by beating the 2015 US Open finalist Roberta Vinci in what is sure to be a packed and awed Centre Court, she will make as many people furious as delirious.

At stake is not a mere result, nor even temporary glory for a bread-and-butter tournament the leading players use to tune up for the slams. Sharapova, a triple-champion who is here courtesy of a wildcard 24 hours after the end of her drugs ban, is playing for vindication and an excuse for another, more important invitation: to the French Open next month. Tennis also desperately needs Her Blondeness back.

Sharapova will qualify for the preliminary tournament at Roland Garros by right if she reaches Sunday’s final in Germany. While that is unlikely, there will be many gormless cheerleaders willing her to do so. If she loses before then, she will have to rely on the whim of the French federation president, Bernard Giudicelli, who gives the impression of being immune to her charms, and gets a chance to prove his steel when he hands down a decision on May 15th.

Giudicelli knows that Sharapova is perfectly placed to fill the giant vacuum in the schedule recently created by the world No1 Serena Williams, who is inconveniently absent for the rest of the year while awaiting the arrival of her first child. Tommy Cooper did not have better timing.

There is an argument to say that a former champion should be welcomed back in the main draw of a tournament ahead of more deserving hopefuls – although not a very convincing one, in these circumstances. Which is why Giudicelli could use the qualifying tournament as a convenient route back to the majors for her. Wimbledon will have this discussion in coming weeks, too.

If Sharapova were to find a rich vein of form, of course, and earn her way back from the wilderness, there could be little argument. Nobody knows if her tennis is in good enough shape to do that, which is part of the fascination.

Contenders for the sport’s biggest prizes will nevertheless be ambivalent. Sharapova is good for business, just as Tiger Woods was in golf, but there is little warmth for her in the locker room. It is fair to say that those immediate rivals who have not already publicly objected to the unseemly haste with which the tournament organisers have embraced her will quietly add their voices to the chorus of indignation if she beats the likeable 34-year-old Italian on Wednesday.

Caroline Wozniacki, who always speaks her mind, called Sharapova’s presence in Stuttgart “disrespectful”. Vinci, who will give her the best Italian stare she can muster on Wednesday, said “I don’t agree about the wildcard here and about the wildcard in Rome and the other tournaments.” Dominika Cibulkova was similarly robust in her objection before she withdrew from the tournament with an injury. Had she stayed, she would have played the winner of Sharapova-Vinci. Damn.

So, Sharapova does not have many friends in Stuttgart. She does not have that many outside Stuttgart apart from family and the tournament’s sponsors, who are also her sponsors, of course – one of them, at least; nobody attracts commercial deals like the woman who sells sugar to kids.

There will be also fans who fawn, a worryingly large number of them in possession of media credentials. Sharapova can turn journalists into weak-kneed puppy dogs with her cool charm.

As an illustration of how much she means to the sport, there is the example of Eugenie Bouchard. On the same afternoon that Sharapova was preparing for her return, the one-time Canadian prodigy was losing her sixth match in a row, love and four to the world No94 Jana Cepelova in Istanbul. Bouchard’s glow has properly faded. She once was the new Sharapova: blonde, beautiful, tempestuous and, when the mood took her, a very good player.

But Bouchard, a Wimbledon finalist only three years ago, has serially failed to live up to her billing. That is not a criticism of her character, but of her tennis. Nobody could blame a player for taking advantage of her popularity with sponsors and tournaments . . . unless, perhaps, that player has never bothered much with being liked by her fellow professionals.

Bouchard at least has a ranking: 59. But she does not have the game the five-slam champion Sharapova once had, and might still produce when it matters. The Canadian is 23 and has her career in front of her, although the only opponents she has beaten since she lost to the American Coco Vandeweghe in the third round of the Australian Open have been world No601 Briana Morgan and Anhelina Kalinina (305) at Indian Harbour Beach. Defeat by world No896 Victoria Duval set in train the depressing run that delivered her up to another dispiriting experience by the Bosphorus.

Having just turned 30, Sharapova has to look back at her best tennis, rather than forward. That, however, in no way diminishes her appeal. If anything, her time away has added mystery to a persona already drowning in it.

Arguments about her drugs ban should be buried. That episode is gone. What exercises her critics now is the preferential treatment that is so gauchely being shovelled her way. And she could not give a damn.

Pádraig Harrington says Ryder Cup must go ahead in September 14:43
Allaho could be Ryanair bound after assured win at Thurles 14:13
Tadhg Furlong could be fit for Ireland’s Six Nations opener against Wales 13:18
Arsenal sign Real Madrid’s Martin Odegaard on loan 12:12
Sergio Garcia has his eyes set on September’s Ryder Cup 12:05