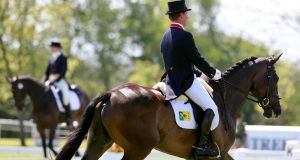 British riders dominated the weekend’s Ballindenisk international horse trials in Co Cork with Sam Watson being the only senior Irish competitor to top a line-up on Sunday following his victory in the Eventing Ireland CCI2* class with Ardagh Highlight.

The Co Carlow rider led from the outset by winning the dressage phase on Friday on a score of 43.6 penalties and completing on that mark with a double clear in the cross-country and show jumping phases. His mount, a 13-year-old Irish Sport Horse gelding by Puissance, was bred in Co Kilkenny by Teresa Walsh out of the Kings Servant mare Gentle Servant.

At the prize-giving ceremony on Sunday, Watson retired Horseware Bushman who was bred by the rider’s parents John and Julia. The 18-year-old Puissance gelding, which represented Ireland at two World Equestrian Games, four European championships and six four-star events, retires with a record 1,451 Eventing Ireland points.

Britain’s Oliver Townend maintained his excellent strike rate at the Fell family’s venue when landing the Horse Sport Ireland CCI3* class on the 17-year-old Trakehner gelding Lanfranco TSF and the CCI1* class with Coldplay III. The latter is a 10-year-old German-bred gelding by Chadron Quainton.

There were 32 starters also in the CIC1* class where victory went to Britain’s Kristina Hall-Jackson riding CMS Google (45) ahead of Ireland’s Michael McNally on Eclipto (47.2) and Louise Bloomer on Hollybrook Hotshot (47.6). Co Kildare’s Ava Banahan landed the CIC1* class for ponies on her mother Marie’s Rathnaleen Dark Secret.

At the national one-day event held in Tyrella, Co Down on Saturday, local rider Joseph Murphy won the top-rated CNC2* class with Hugh Douglas’s eight-year-old Colin Diamond gelding Rock Harbour. Murphy will be sitting out next weekend’s action as he prepares for the Badminton Horse Trials which start on Thursday week, May 4th.

The national outdoor show jumping circuit commenced on Saturday with the first session of the two-day Louth County show in Dromiskin.

The show also staged the first round of the 2017 Irish Sport Horse Studbook show jumping series with nine combinations jumping double clears to split the win the five-year-old division while a dozen did likewise in the six-year-old section.

The seven-year-olds jumped off against the clock with victory going to the Mervyn Clarke-owned and ridden Thomascourt Senna, a Mermus R gelding bred in Co Antrim by Cynthia Beattie out of the Cruising mare Playgirl. The next round of the series takes place at Barnadown, Co Wexford on May 6th and 7th.

1 Limerick roar from behind to sink Tipp and start league in style
2 Mike Catt hopes to have Irish backs purring in Six Nations
3 Six Nations: Ireland are contenders but England still the team to beat
4 GAA officials and referees brace themselves as new rules kick in, and this time it's for real
5 Owen Doyle: Creeping professionalism of schools rugby a threat to the game
Real news has value SUBSCRIBE