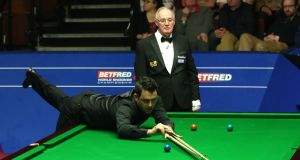 Ronnie O’Sullivan in action against Ding Junhui on day eleven at the Crucible. Photograph: PA

Ding Junhui produced a sparkling display at the Crucible to lead Ronnie O’Sullivan 10-6 in their world championship quarter-final.

Every frame featured a break of 50 or more, Ding taking a 3-0 lead before O’Sullivan levelled the morning session at 4-4, with the Chinese player pulling ahead again in the evening to hold the advantage in the 25-frame match.

Ding took frame one with a 71 break and followed that up with a magnificent 128 clearance to double his advantage. It got better for the world No4 as another run of 71 put him further ahead, with O’Sullivan barely getting to the table. But the 41-year-old hit back with a 63 to finally get on the scoreboard before the mid-session interval and took the next two after the restart with runs of 99 and 65 to level the match.

Ding scraped the next on a respotted black despite a 69 break from the five-time champion, who finished off with a run of 59 to restore parity. The pattern continued into the evening as Ding returned with a frame-winning 63 clearance in the ninth.

O’Sullivan came from behind to win the next with an 84 but was unable to repeat the dose in frame 11 after over-running a positional shot to the black. Ding cleared with 64 and made it 7-5 at the interval with a 65. He then resumed with a 120 break and went on to stretch his lead to 10-5 with breaks of 59 and 58. O’Sullivan, though, produced a defiant rapid-fire 104 in the final frame to give himself a chance.

If the closing century put that match in the balance, John Higgins looked to have broken the challenge of Kyren Wilson on the other table. Wilson had levelled from 2-0 down in the morning, helped by a 92 break, but damaged his cue tip and, after a brief stoppage for repairs, saw four-time Crucible champion Higgins open up a 5-3 lead with breaks of 62 and 59.

The Scot began the evening with a 129 and, after the next two were shared, added breaks of 74 and 135 either side of the interval to lead 9-4. Wilson responded well with a 97. Higgins, though, won the last two to leave himself two frames from victory at 11-5.

The reigning champion, Mark Selby, was also on course for a place in the semi-finals after storming into a 6-2 lead over Marco Fu in the afternoon session, reeling off the first five frames before Fu gave himself a glimmer of hope.

Selby, the world No1, took advantage of the weary-looking Hong Kong player – who got through with a 13-11 win against Neil Robertson in a late finish on Monday – by racing out of the blocks. Having won the first two, breaks of 82, 70 and 94 put him in complete control with Fu not potting a ball in over an hour. The world No8 reduced the deficit to 5-2 after finally getting among the balls but Selby restored his four-frame cushion to take a step closer to defending his title.

Stephen Maguire won the first frame against Barry Hawkins on the other table but would ultimately be relieved to trail just 5-3. After Maguire’s opening 81, runs of 46 and 98 helped Hawkins move 3-1 ahead at the mid-session interval and the lead then became 5-1.

The Scot stopped Hawkins’ five-frame winning run by stealing a tight seventh frame on the black, having needed snookers, and crucially also won the last frame of the afternoon.