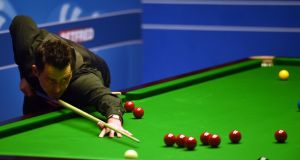 Ronnie O’Sullivan plays a shot during his World Championship quarter-final match against Ding Junhui at The Crucible in Sheffield. Photograph: Paul Ellis/AFP/Getty Images

Ronnie O’Sullivan bowed out of the World Championship despite producing another unforgettable Crucible moment on Wednesday.

Ding Junhui claimed the scalp of the five-time champion, winning through 13-10 and setting up a clash with Mark Selby in the semi-finals – a repeat of last year’s final match-up.

O’Sullivan made a thrilling 146 break – just the third in World Championship history – as he began to fight back.

But Ding held on to claim a prized scalp, finishing off with an ice-cool 117, his third century of the match.

O’Sullivan offered a hug at the end, his campaign over.

O’Sullivan’s 146 will live long in the memory. After taking 12 reds and blacks, he seemed to deliberately play for the pink when he could have kept a maximum 147 alive.

He cleared the table perfectly from there, cutting his deficit to 11-9, but O’Sullivan could not get close enough to his opponent in the end.

Ridiculous from Ronnie! @ronnieo147 laughing on the way to making a rare 1⃣4⃣6⃣ break at the Crucible! #ilovesnooker @Betfred pic.twitter.com/KdCLkJQaCP

“Let’s just say I don’t think he was giving it 110 per cent,” said BBC commentator and seven-time world champion Stephen Hendry, of O’Sullivan’s efforts to get on the black for a 13th time.

At last year’s Welsh Open, O’Sullivan turned down a maximum – snooker’s greatest single-frame exploit – when he learned the prize-money was £12,000.

He said at the time he “didn’t think the prize was worthy of a 147”, and was criticised by World Snooker chairman Barry Hearn.

Hearn, who has this month flatly rejected O’Sullivan’s claims of “bullying” over a disciplinary dispute, was by coincidence paying the Crucible a visit on Wednesday.

Hendry said in commentary on Wednesday that O’Sullivan would be going after the maximum just “for the glory”, before the break took its twist.

“It won’t be the prize he’s thinking about, because that’s disappointing,” Hendry added.

O’Sullivan briefly staved off defeat when he responded to 63 from Ding with a princely 73 to get back to 12-10, but China’s top cueman provided a clinical finish to the contest.

O’Sullivan said he had been trying to make the maximum break.

“I was playing for the black but I just didn’t get on it.”

Pressed on the financial rewards for the 147, he added: “I’m just having a bit of fun. Let’s not go down that route, let’s just enjoy the match and wish Ding the very best.”

Asked about the embrace with Ding, O’Sullivan said: “It was a private moment. I don’t want to say much except I’m a good friend of Ding’s so I wish him all the best.”

“I’ve had the best year of my life and I’ve won not many tournaments. I love what I do, so why would I not do it because I’m not winning tournaments.”