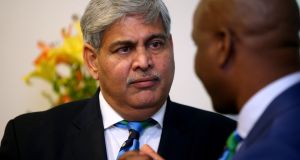 Ireland’s goal of becoming a Test-playing nation moved a step close in Dubai on Wednesday afternoon after the International Cricket Council (ICC) voted in favour of changes over both its governance structure and a revamping of its revenue model.

The proposals put forward required constitutional change with a review of full membership as well as a two-tier Test structure, which is likely to see Afghanistan and Ireland being granted Test status.

The ICC’s first independent chairman Shashank Manohar, who used to head up the Board of Control for Cricket in India (BCCI), was also looking to rubber stamp a new revenue model, which would cut the share of the ‘big three’ of India, Australia and England, in a bid to boost the coffers of developing nations.

Only India, which under the old statutes received some $570 million (€534 million) voted against the ‘governance and constitutional changes’, which were passed by a 9-1 majority, while the revenue changes saw an 8-2 result with Sri Lanka Cricket also opposed.

A senior BCCI official said, as reported by the Press Trust of India: “The BCCI has voted against both as we had, in principle, maintained that all these changes are completely unacceptable for us. At this point, we can only say that all options are open for us.”