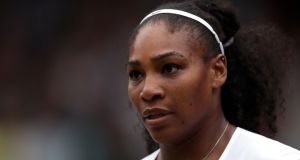 Serena Williams has spoken about the Ilie Nastase controversy, writing on Instagram: “It disappoints me to know we live in a society where people like Ilie Nastase can make such racist comments towards myself and unborn child and sexist comments against my peers.” Photograph: PA

American tennis player Serena Williams has accused Ilie Nastase of racially abusing her and her unborn baby as she made her first response to comments the Romanian former world No1 made about her.

Nastase was overheard on Friday at a press conference for the Fed Cup tie between Romania and Britain saying about the current world No 1’s unborn baby: “Let’s see what colour it has. Chocolate with milk?”

Williams confirmed on Wednesday last week that she was 20 weeks pregnant with her first child after posting an image of her baby bump. Her fiance Alexis Ohanian, the co-founder of the Reddit website, is white.

He was also heard to call her and British No1 Johanna Konta “fucking bitches” in an outburst that led to his provisional suspension by the International Tennis Federation (ITF) and expulsion from the competition being held in Constan?a, Romania.

In a comment on Instagram, Williams wrote: “It disappoints me to know we live in a society in which people like Ilie Nastase can make such racist comments towards myself and unborn child, and sexist comments against my peers.

“I have said it once and I’ll say it again, this world has come so far but yet we have so much further to go. Yes, we have broken down so many barriers - however there are a plethora more to go.

“This or anything else will not stop me from pouring love, light and positivity into everything that I do. I will continue to take a lead and stand up for what’s right.”

The 35-year-old American player said she was not afraid, and directed questions and a defiant statement to Nastase, drawing on a quote by Maya Angelou: “Does my sassiness upset you. Why are you beset with gloom? You may shoot me with your words ... you may try to kill me with your hatefulness, but still, like air, I rise.”

Williams also thanked the International Tennis Federation, adding: “They will have my full support.”

Nastase was expelled from the stadium on Saturday after swearing at officials, as well as at Keothavong and Konta. He also directed an aggressive rant at a Press Association journalist.

The Romanian has remained defiant about his expulsion and has made no apology for his conduct. “I don’t need this bullshit. I’m 70 years old. I don’t even get paid for being team captain. I don’t give a shit if they fine me,” he told the Daily Mirror.

His friend, the former gymnastics star Nadia Comaneci, was one of the few public figures in Romania to criticise Nastase.

“I cannot condone or defend his recent ugly and very offensive remarks … I am a great supporter of women in sport and I would never condone any kind of sexist comments of this kind, whether they are from Ilie Nastase or anyone else,” she said.

Meanwhile, Keothavong questioned whether Nastase should have been appointed as Fed Cup captain given his notoriously volatile temperament.

“Clearly his behaviour on court over the weekend and leading up to this tie was inappropriate and in hindsight maybe he shouldn’t have been put in the position that he was,” she told Sky Sports News.

“You walk out on to court as a tennis player expecting to be in a safe environment and expecting to be playing against a partisan crowd – that’s understandable – but you don’t expect to be verbally abused when you’re out there just trying to do your job.”