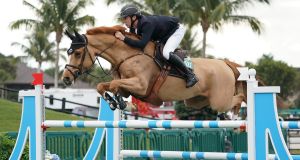 Ireland’s Bertram Allen has made his mark on his first competitive visit to the Winter Equestrian Festival in Wellington, Florida by winning the first two FEI-affiliated classes in week four of the 12-week festival during which $13 million is on offer.

In the grass Derby field on Wednesday, the Wexford native landed the 1.40m four-star two-phase competition which, from 69 starters, produced 20 double clears within the 48-second time allowed over a course designed by Brazilian Anderson Lima.

Third to go on Quiet Easy 4, which is owned by his family’s Ballywalter Stables, Allen set an unbeatable time of 31.46. Canada’s Erynn Ballard finished second on Canora Z (31.66) with the USA’s Peter Lutz just beaten into third on Excellent (31.69). Kerry-born Captain Brian Cournane was fifth with Colourful Lady (33.55).

Allen only took over the ride again on Quiet Easy 4 during the autumn. Of the Quidam’s Rubin gelding, the 24-year-old said: “I had Quiet Easy a few years ago, then he was sold to Norway. The owners didn’t have so much for him to do, so they said they’d send him to me if I could retire him when he was finished. He’s nearing the end of his career now, so it’s nice to just enjoy him.”

Although 16 this year, Quiet Easy shows no sign of slowing down. “He’s very, very quick. He has won a lot of speed classes during his life, so it wasn’t difficult for him to go fast today,” said Allen. “My brother Harry had him at a national show (in Germany) two weeks ago and he jumped so well that I said I’d bring him here. It wasn’t originally the plan.”

Continuing on the grass on Thursday at the Palm Beach International Equestrian Centre, Allen recorded the fastest double clear to win round four of the Equinimity WEF Challenge for the Barry Louise Lane trophy on Ballywalter Stables’ GK Casper (39 seconds).

Best of his rivals in this 1.55m jump-off class was the USA’s Natalie Dean riding Jewel de Kwakenbeek (39.02) with Britain’s Amanda Derbyshire, who is mainly based in the United States, finishing third on the Irish Sport horse mare Luibanta BH (39.28), a 12-year-old by Luidam. Cork native Billy Twomey slotted into seventh with the year younger, Lady Lou (40.78).

“It’s a good start and long may it continue,” said Allen. “He’s a good horse this one and very, very careful so you can really ride him at the jumps and normally he doesn’t have too many down.”

In the jump-off, Allen started at a blistering pace, taking a big pull mid-way round the course. “I wasn’t getting there on the stride that I wanted, and so I had to add one, but that’s okay. I wanted to win this class, but it wasn’t a class to take a crazy stupid risk in, so I said I’d just do as good as I can. It was very close, but thankfully it was good enough for today.”

GK Casper is no stranger to North America, having been here in 2019. “I did a trip at the back end of last year to America and Canada and he was very good,” added Allen. “He won the World Cup class in Toronto and, since then, I haven’t campaigned him too hard. This is the first week back up and at it and he feels great, so hopefully now he’s in for a good few weeks.”

Allen, who has ridden the 12-year-old gelding by Canto 16 since he was six, added: “We know each other inside out. He’s taken a bit longer to get to the top level but he seems to be getting there now. He’s a cheeky bugger but he’s bold and he knows he’s good and has a big character, which is nice.”

Allen is spending two weeks in Florida with the three horses he has shipped over for the season, before returning home to Germany for a week to campaign his others. In Wellington, his “really good groom” Marlen Schannwell and friend William Hickey will keep working the horses in his absence.

Also in Florida, but at Deeridge Farms, there were placings on Thursday for Derry’s Jordan Coyle with Des le Debut in the 1.40m two-phase class, for his brother Daniel on Farrel in the 1.45m speed competition and for Co Meath’s Cian O’Connor with Brooklyn de Hus in the morning’s 1.40m speed class.

Italy-based Anna Merveldt, who helped Ireland secure a team place in the dressage competition at this year’s Olympic Games in Tokyo, will be out of action for a short time having fractured her arm in a non-riding accident last week.