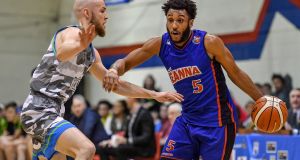 The National Basketball Arena in Tallaght is the place to be this weekend as the National Cup finals take centre stage from Friday until Sunday.

The main business of the weekend features the National Cup showdown between DBS Éanna and Griffith College Templeogue at 8pm on Saturday night, while Singleton SuperValu Brunell and Pyrobel Killester will battle it out for the women’s National Cup in a hugely-anticipated game at 5.30pm on Sunday evening.

Éanna and Templeogue have already produced a thriller when they met in the league in Dublin earlier in the season. That game went right to the wire, and it was the sharpshooting from Templeogue’s Neil Randolph in the closing two minutes that eventually separated the teams.

Both teams have big threats all over the court with Templeogue also boasting huge experience at this level having won two cup titles in recent years. They are used to playing on the big stage.

They will be looking to stalwarts Jason Killeen, Stephen James, Lorcan Murphy and Randolph to put in some big performances while the added size of Darren Townes should help to cause Éanna trouble under the boards.

Éanna meanwhile are enjoying a dream campaign this season as they savour their first year back in the Super League.

Ensconced in the chasing pack at the top of the league table, Éanna have added an extra bit of history to an already fantastic season as they saw off the challenge of Garvey’s Tralee Warriors in the cup semi-finals to reach their first ever National Cup final and set up a fifth Dublin derby in a row in the decider

They will be looking to one of the standout players in the league, Stefan Zecevic, to be in flying form for them this weekend, while Mark Reynolds, Joshua Wilson and Neil Lynch will also need to put in some big performances if they hope to get past experienced Templeogue.

Looking ahead to the game, Éanna head coach, Darren McGovern said: “This is the biggest game in the Irish basketball calendar and I am hoping for a positive reaction from my players.

“They have put a tremendous amount of work into the season so far, and we are in good spirits going into Saturday night. If we can stay close to Templeogue in the first half I think we have a chance to make some monumental history for our club. All eyes will be on this game and I think we have some serious big-time players who can deliver.”

“We’re really looking forward to the game on Saturday night. I’m sure the atmosphere will be electric as both sets of fans are really going to bring great energy to the occasion.”

Pyrobel Killester meanwhile will be hoping that they can end a 15-year Cup drought this weekend as they head to the Arena for the final for the first time since 2016 in a bid to get their hands on the coveted trophy.

In their way though are last year’s cup runners-up, Singleton SuperValu Brunell, who caused the upset of the semi final weekend when they overcame league leaders, DCU Mercy, in a thriller down in Cork.

The big worries for Brunell coming into this game will be the health of their point guard, Danielle O’Leary, who picked up a knock in that semi-final clash, while young Irish international, Katie Walshe, picked up a serious hand injury in their league game against Glanmire last week.

They still have a number of other threats who will be able to cause havoc for Killester, including American duo Treyanna Clay and Aryn McClure who each put in a dazzling semi final display, while Lithuanian guard, Greta Tamasanskaite could well prove to be a handful for the Killester defence. Young guard, Laura Morrissey, also put in a big performance in the semi-final, and Tim O’Halloran will be hoping for the same from the talented young player.

Killester meanwhile also have a lot of talent throughout their roster. They boast some of the best Irish shooting talent in the country with Rebecca Nagle, Aisling McCann and Michelle Clarke all strong three-point shooters, while their American combo of Adella Randle El and Christa Reed caused Glanmire a lot of problems in the semi-final.

Karl Kilbride’s squad will also need big performances under the boards from Leah Rutherford and Ella McCloskey if they are going to try and keep the threat of Treyanna Clay at bay. It certainly promises to be a ding-dong battle at the arena.

“We are really looking forward to Sunday and the chance to win our first cup. The squad has worked hard this week and all the game preparations are done at this stage so fingers crossed we will be good enough on the day. Once again we will be underdogs, but I believe in my team and hope their efforts get rewarded,” said Brunell’s Tim O’Halloran.

Killester’s Karl Kilbride also looked ahead to the clash.

“At this point, we’re just really looking forward to the game starting. The buildup and all the media all week has been entertaining. We’ve had two really exciting games to get here and now we need to go out and finish the job on Sunday.

“Brunell are such a talented squad with such firepower. They have three pros and a bunch of underage and senior Irish internationals. They’re a threat from everywhere on the floor, they can hurt you inside and they shoot the ball really well from three. The two games we played against them this year were both really close and exciting.

“Our defence has been the key to us winning or losing games all year. We feel confident that we can get into a shoot-out with anyone but it’s when we’re in sync at the defensive end that we excel and that’s something we’ll be focusing on this Sunday.”

In the other games this weekend, the IWA Wheelchair National Cup final is set to be a cracker as old rivals, Rebel Wheelers and Killester WBC face off in what is set to be a superb opening game to the weekend.

This will be followed on Friday evening by the meeting of Portlaoise Panthers and Waterford Wildcats in the women’s U18 final with both teams boasting a host of young Irish internationals across their rosters.

Saturday will see three big games before the Pat Duffy cup final, including the much-anticipated meeting of Moycullen and UCD Marian in the U20 men’s cup final, Neptune will go head-to-head with Belfast Star in the U18 decider in what will be a big battle of skill and physicality, while Ballincollig are hoping to remain undefeated so far this season and defend their President’s Cup title in style when they go head-to-head with IT Carlow Basketball.

Sunday morning will tip off with the first of the three women’s finals that day, as Waterford Wildcats face UU Tigers in a game that could go right to the wire, while the Women’s Division One final is set to be one of the other big games of the weekend as Portlaoise Panthers face Trinity Meteors.

Both the men’s and women’s Super League finals will be broadcast live on TG4 on Saturday and Sunday evening, with all other finals streamed live throughout the weekend.