In an Olympic year, this is effectively an important Ireland trial 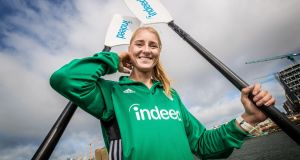 Sanita Puspure: will be among the participants at the Irish Indoor Rowing Championships in Limerick on Saturday. Photograph: Billy Stickland/Inpho

It is the one event of the year when a man who had no background in the sport but rowed the Atlantic – Damian Browne – rubs shoulders with Sanita Puspure and Paul O’Donovan, legends of the sport here who will represent Ireland at the Olympics this year.

The entry for the Irish Indoor Rowing Championships in Limerick tomorrow (Saturday) has the very top internationals, a big complement of coastal rowers, a muscular set of gym kings who will never sit in a boat – and Robert Collins of the Salty Pair, who will row the Atlantic this year.

The bulk of the entry consists of young men and young women who hope to row at the highest level. One hundred junior 18 men will duke it out, with outstanding talents such as Tom Kelly of Kenmare, Andrew Sheahan of Lee and Fionn O’Reilly of Skibbereen at or near the top end. Holly Davis of Lee Valley enters above her age group, at junior 18, and is set to take on Molly Curry of Coleraine Grammar School.

This is effectively an Ireland trial in Olympic year. The public get to watch as nine men, led by Paul O’Donovan, contend in the open lightweight category looking to find places in one Olympic boat.

Puspure should be the top woman, but there are 11 other women in the open category. At least three under-23 rowers (Emily Hegarty, Tara Hanlon and Claire Feerick) will also have eyes on finding their way to Tokyo, possibly through a promising women’s four.

Rowing Ireland received a funding lift for the year ahead from Sport Ireland. There is an additional €20,000 in core funding, while the money for Tokyo support – “Special Project Funding” – comes in at €150,000. Rowing is eighth in a table of high performance funding, at €620,000 for the year.

Trinity College, Dublin, has beefed up its rowing programme: Paul Thornton has joined as assistant to men’s chief coach Richard Ruggieri, while earlier this month, John Harman joined from Oxford Brookes to work on strength and conditioning with both the women and men.

Ruggieri says he would love to have Ireland internationals this season, but in his well-funded system the student rowers would have to be available to Trinity for key dates and the high performance system has not facilitated this.

In the future, moving the Irish Championships away from the middle of the international season may be a way forward.

UCD are also at arms length from the high performance programme as they look to have another successful season. The crew which won the men’s senior eights title in 2019 were built around their stellar senior four, which has now gone different routes: Shane Mulvaney has been in Australia, Shane O’Connell took up top-end cycling, David O’Malley has been concentrating on his medical studies.

For Andrew Goff, a new rowing challenges await; he is firmly in the frame for selection for Cambridge in the Boat Race in March. Caoimhe Dempsey, previously with Trinity, has also made a strong case to be in the Cambridge women’s boat.