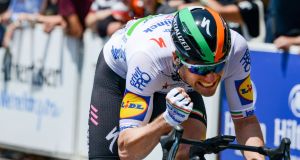 Sam Bennett from team Deceuninck- Quick Step celebrates his win on stage one of the Santos Tour Down Under in Adelaide. Photograph: Brenton Edwards/AFP/Getty

Sam Bennett will look to grab his second stage win in the Santos Tour Down Under today, with the fourth stage to Murray Bridge providing an opportunity for the sprinters.

The 152.8 kilometre leg features undulating roads in the first half of the stage, including the category two Mount Torrens, but Bennett’s solid climbing ability means he should remain close to the other riders.

The predominantly downhill and flat roads from that point suggest a bunch finish, where he will aim to shine.

Thursday’s third stage was one for the climbers. Australian Richie Porte (Trek-Segafredo) took a solo win five seconds ahead of a chasing group; Bennett kept his powder dry and rolled in over five minutes back. Porte leads overall, with Bennett sixth in the points classification.

In other news, Cycling Ireland have named the squad that will contest the UCI Paracycling Track World Championships in Milton, Canada between January 30th and February 2nd.

Five-time road world champions Katie George Dunlevy and Eve McCrystal feature, while Ronan Grimes will aim to improve on the fine silver medal he clocked up at the MC4 scratch race last year.

Cycling Ireland’s national performance coach Neill Delahaye said that the squad is in a good place.

“We are generally happy with where people are at,” he said on Thursday. “PBs were being hit in training, so they are in good shape. They have put in a lot of work. There has not been much of a break between road and track season and they have worked pretty hard at it now, but that is the year that is in it.”

The riders will aim for strong performances in the world championships, both as an immediate goal and also a stepping stone towards the Paralympics.

“We are in a decent place, but ultimately we have more bikes on the squad than we are going to qualify,” Delahaye said, referring to slots for Tokyo. “That is always the case. But the better the guys go, the further up the nation’s rankings we get and we secure additional slots. It is a little bit of a group push towards the line now to try to secure those points. How many bikes we have really depends on how these worlds go.

“That is why everybody has been training so hard, to try to secure and maximise the nation’s rankings points.”

1 Gerry Thornley: After 32 weeks the Six Nations is back up for grabs
2 Extremes of sweet and sour for Solskjaer as Man United show signs of revival
3 Bennett girding his loins for impossibly unpredictable Vuelta
4 Stockdale and Ringrose on board with expansive Irish game plan
5 Arsène Wenger: Arsenal was a matter of life and death to me
Real news has value SUBSCRIBE