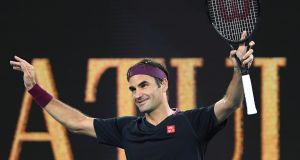 Roger Federer made a winning start to his campaign in Melbourne. Photograph: Quinn Rooney/Getty

Roger Federer showed no sign of rust despite a lack of match practice ahead of the Australian Open as he launched his bid for a record-extending 21st Grand Slam title by hammering Steve Johnson 6-3 6-2 6-2 in the first round on Monday.

Playing his first competitive match since losing to Greek Stefanos Tsitsipas in the ATP Finals in November, the 38-year-old broke his opponent’s serve early in each of the three sets and closed out the match when Johnson hit a return long.

Unlike his main rivals, third seed Federer, who won his last Grand Slam in 2018 at Melbourne Park, opted out of the inaugural ATP Cup in Australia to spend more time with his family before launching his 22nd season on Tour.

In his pre-tournament news conference on Saturday, Federer talked about the importance of getting off to a fast start and he did that against the American, who has not won a set in his three meetings against the Swiss.

“I just haven’t played proper matches in many, many weeks, and a lot of guys, probably 95 per cent of the guys, are coming here with matches,” Federer told reporters.

“For me really the first three rounds are key to get going, to get used to the pressure, stay calm, when to save breakpoint or 30-all points or whatever it may be, or just to stay calm if you’re down a set and a break or whatever it might be.

“This is sort of the unknown that can be a little bit scary at times. But today there was none of that because I broke early each set and was able to get on a roll, play freely after that ... I felt like I had the game under control.”

Federer broke the American in his first service game to go up 3-0 and never looked back.

Despite blustery conditions, Federer served superbly from the start and hit winners at will against Johnson, who is ranked 75th in the world, and he was as ruthless under the closed roof at the Rod Laver Arena after play was interrupted by rain.

He faced just a single breakpoint in the entire match, hitting 10 aces and 30 winners.

“I just think I have to be careful. Round-by-round, point-for-point mentality,” added Federer.

A six-time champion at Melbourne Park, Federer will take on the winner of the match between French qualifier Quentin Halys and Filip Krajinovic of Serbia in the second round.

Later in the day second seed Novak Djokovic was forced to work hard by unwavering German Jan-Lennard Struff in his first match of the Australian Open before prevailing 7-6 (5) 6-2 2-6 6-1 to stay on course for a record-extending eighth title.

Defending champion Djokovic got off to a strong start for a 5-2 lead in the opening set but the German world number 37 fought back to level things at 5-5 before going down in a closely-fought tiebreaker.

The second set proved relatively simpler for the winner of 16 Grand Slam singles titles as he converted two breakpoints while showing the same kind of form that helped him lead Serbia to the inaugural ATP Cup title before arriving in Melbourne.

Struff continued to persevere, breaking his opponent thrice in the third set, but Djokovic wrested back initiative early in the fourth to set up a second round meeting against either Japanese wildcard Tatsuma Ito or lucky loser Prajnesh Gunneswaran of India.