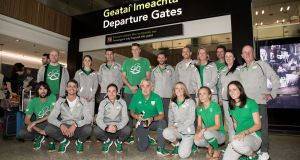 Paul McNamara (back row, third from left) was part of the Ireland management team for the Rio Olympics last year. Photograph: Dan Sheridan.

Athletics Ireland have announced the appointment of Paul McNamara as director of high performance. He will take up the role on April 10th.

He has been on secondment to Athlone Institute of Technology since 2013 working with its athletic programme and managing AIT Grand Prix.

He has been part of the Athletics Ireland management team at the 2015 World Championships in Beijing, the 2016 European Championships in Amsterdam and the 2016 RIO Olympics. He is a member of Athenry AC and a gold medallist at the schools international cross country in 1991.

He represented Ireland at European and World Cross Country Championships and is a three-time national champion. He attended Providence College from 1994 to ’98 competing in NCAA competition and serving as team captain in his senior year.

Paul McNamara said “ I am delighted and proud to be taking up the role of director of high performance in Athletics Ireland and am looking forward to working closely with the athletes and coaches to ensure we can optimise our performances at European, World and Olympic level over the next four years”.

John Foley, CEO of Athletics Ireland, said “ We are delighted that Paul has agreed to be the director of high performance of Athletics Ireland. I have worked closely with him for the past seven years and have continued to be impressed by his drive and commitment.

“He has extensive experience of grass-roots and elite athletics in Ireland and been a senior member of our team management at major international events. I look forward to Paul taking up his appointment in early April and to working closely with him.”