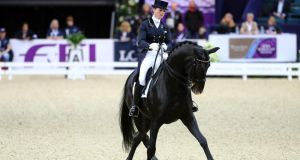 The annual Longines FEI World Cup Finals get underway on Thursday in Omaha, Nebraska where Ireland will be represented by Kildare’s Judy Reynolds and Tipperary’s Denis Lynch who both finished third in their qualifying league tables in dressage and show jumping respectively.

Reynolds will partner Vancouver K which is owned by her parents Joe and Kathleen Reynolds. On the now 15-year-old gelding, the Germany-based rider finished eighth at the finals in Sweden last year and also qualified for the final round of the dressage competition at the Olympic Games in Rio de Janeiro.

Co-host at Wednesday night’s draw with Britain’s Carl Hester, Reynolds will be the 11th rider into the arena (15.50 local time) for Thursday’s Grand Prix. Last to go of the 16 starters will be the in-form competition favourite, Isabel Werth of Germany with Weihegold.

Lynch and Thomas Straumann’s 14-year-old stallion All Star were one of the most consistent combinations en route to the finals and will be among the favourites to lift the World Cup jumping trophy.

The Irish combination have been drawn 26th of the 37 starters for Thursday’s 1.60m speed class which is due to start at 19.00 local time. Riding Bianca, Switzerland’s Steve Guerdat will bid to become only the fifth three-time champion in the 39-year history of the series when 32nd to go.