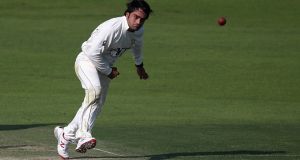 Rashid Khan’s five-wicket haul has left Ireland facing an uphill task if they are to salvage anything from their Intercontinental Cup clash with Afghanistan in India.

The teenage leg-spinner yet again wreaked havoc with the Irish line-up taking five for 54 as Ireland collapsed from 123 for one to 170 for seven at the close of play on the second day at Greater Noida.

Andrew Balbirnie (62) and Ed Joyce (45) had shared a second-wicket stand of 117 after the early wicket of William Porterfield – one of four lbw decisions to go in Afghanistan’s favour in a day which offered no shortage of controversy.

Mohammed Nabi was at the centre of one of the main talking points – claiming a catch at second slip, when he picked the ball up off the ground after dropping a Balbirnie edge.

Earlier, Afsar Zazai had benefited from a reprieve by the umpires when he edged a Peter Chase delivery to Niall O’Brien – the umpires uncertain whether the ball had carried.

Zazai went on to score his maiden first-class century, sharing a ninth-wicket century stand with Dawlat Zadran as Afghanistan piled on the runs scoring an imposing 537 for eight declared.

Balbirnie struck nine boundaries in a fluent 62, but his dismissal by Zahir Khan opened the door for Rashid Khan to weave his magic.

Ed Joyce, Niall O’Brien and George Dockrell all went lbw to the teenager, while Gary Wilson went caught behind.

The final wicket to fall was Paul Stirling – batting at the unfamiliar position of 8 after being off the field with a hand injury – who was bowled by a superb delivery from Rashid.

Ireland will resume the third day 367 runs in arrears.