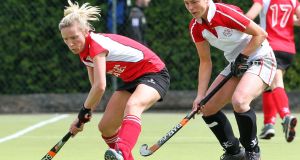 Just over three years ago Rachael Kohler decided that she would take up hockey again with her club, Cork Harlequins. Pushing 40-years-old, there was nothing strange in that in hockey.

But her attitude was different. After having two girls, now aged five and seven, she was coming back to take up the challenge of playing in the newly structured All-Ireland League.

Ten years before Kohler had already completed a hugely successful playing career with Ireland, finishing with 166 caps, then the most-capped female hockey player in the country.

She also represented Ireland in two World Cups – in Dublin in 1994 and Perth in 2002. No Irish team has qualified for a World Cup since Australia, leaving Kohler as the last Irish captain to compete at that level.

Now 42-years-old, her club career is on the rise and along with her sister-in-law Karen Bateman, who is also 42, the astonishing duo will hold the midfield for Harlequins when they meet UCD in Sunday’s Irish Senior Cup final.

That two players in their forties are facing a UCD team, half of whom are current international players, seems vaguely preposterous. But this is far from a making up the numbers trip to Dublin.

“Rachael has no problem playing against current international players,” says Harlequins’ manager Robert O’Sullivan. “Herself and Karen will keep up. They both look after themselves. It is a great story. They are both so driven and manage their bodies so well.

“And it’s not just for 10-minute spells. They play the bulk of the match and in midfield and when others are flaking they are still going.  Both are an absolute credit in their attitude, their mentality and ability to play at that level.”

There are also five international players in the Harlequins’ side as well as underage Irish players so there are no easy slots to fill in one of the strongest teams in the country. Making up the numbers wouldn’t be Kohler or Bateman’s way anyway.

“One of the beauties of sport is that in some ways age doesn’t matter,” says Kohler. “I feel very fortunate to be involved in a cup final that’s for sure.

“We definitely wouldn’t have done it without each other. We’ve played  together for many years now and all those trips up the country for the Irish Hockey League, it made it  so much easier having Karen there.

“We actually found it quite hard when we came back at first. I would say our fitness has come back to us that bit easier over the last few years but initially it was quite hard. We both work hard on our fitness but I think it is something that has come naturally coming back after the children.”

What also helps is that the two are sister-in-laws. Karen is married to Wesley Bateman, a former Irish goalkeeper and Rachael is married to his brother, Alan.

Part of what has kept them going is being able to travel together from Cork to matches in Dublin or Belfast with similar motives – to win and get back home for Rachael’s two daughters and Karen’s two boys.

“On the whole I’ve been very lucky with injury,” says Kohler. “I have had some hamstring trouble just this season. When I see some of our squad members have had quite serious injuries over the years I count myself very lucky and that has led to the prolonged career.”

There were some doubts coming back, knowing that 40 is not 20 and understanding the commitment.

“You never want to be spoken about like ‘oh God she should have given up, why is she still playing,” says Kohler.

“But I suppose I knew that as a challenge. I knew my fitness wouldn’t be an issue. Minding myself was something I would have been taught as an 18-year-old on the Irish squad. That became very much my way of life. Supplements? No. I just have a balanced diet and get properly hydrated for matches. I think those little things do make a difference especially at my age I guess.”

“But I love the big matches, the thrill of the cup final. Every player has fears and doubts but ultimately you are playing for enjoyment.”

In its own way wonderful and epic and still a few seasons in their legs.