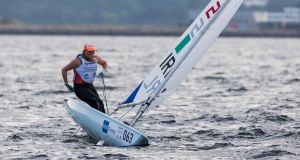 Aoife Hopkins in action during the race in Denmark. Photograph: David Branigan/Oceansport

Wednesday’s weather-delayed racing at the Sailing World Championships at Aarhus, Denmark, was marked by Howth’s Aoife Hopkins’s victory in the only race of the day in the Laser Radial Gold fleet.

After a perfect start, Hopkins went to the right-hand side of the course and was quickly in the lead. And this was a position she did not relinquish despite the calibre of the 56-boat line-up that included the current world champion and Olympic medallists.

Thunderstorms in the area forced the postponement of competition but further races are planned for Thursday.

Lynch had a poor day, placing 46thin the only race. The result comes on top of the Black Flag early starting disqualification from Tuesday’s second race that was upheld after being queried.

With only one race remaining in his series, Lynch needed top-10 results in all four Gold fleet series races to qualify Ireland for Tokyo 2020 at this event where 40 per cent of nation places are being decided.