LeBron James still refusing to ‘shut up and dribble’ 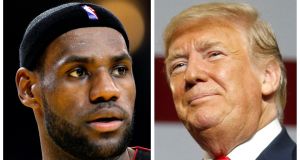 LeBron James was in Las Vegas the other week watching his 13-year-old son Bronny play in the AAU National Basketball Championships. As his team, the North Coast Blue Chips, were going through their pre-game shooting ritual, James walked on to the court, lined up with the teenagers and threw down a few dunks. After every basket, he low-fived the rest of the players and sheepishly took his place in the queue to go again. Like he was one of them. Like they were used to having the biggest name in the sport routinely participating in their drills.

There was something joyous about the cameo. The look on his bearded face at having a ball in his hand and a hoop in his sights. No matter the size of the arena. No matter the occasion. The glint in his eye betraying the knowledge he knew full well he was giving everybody on the court and every shakily held camera phone in the bleachers a memory. That desire to thrill and to create a moment reeked of Muhammad Ali’s lifelong love of causing a little bit of memorable havoc wherever he roamed. Not the only Ali comparison to come to mind in recent weeks.

A few days after the footage of his Vegas antics prompted some deranged commentators to lambaste James for hogging the limelight and somehow detracting from the children, he cut the ribbon on a new primary school in his hometown of Akron, Ohio. He has spent millions building “I Promise” to help 240 at-risk kids, not only in their formative years, but all the way through university, which he has also guaranteed to pay for. Revolutionary, bold and impressive, when he gave an interview with CNN discussing the project, he drew the ire of president Donald Trump.

Notwithstanding the fact Trump’s own great idea for solving the problem of America’s crumbling public schools was to appoint Betsy DeVos, somebody who had never been inside one to that point in her life, as Secretary for Education, his attack on James was, even by his standards, spectacularly wrongheaded. In stark contrast to the guy in the White House, here is a genuinely self-made man, on his way from desperate childhood poverty to his first billion, a character who has led an exemplary personal and professional life where, at every turn, he has sought to improve the lot of those less well-off than himself.

Lebron James was just interviewed by the dumbest man on television, Don Lemon. He made Lebron look smart, which isn’t easy to do. I like Mike!

Whether he has proved a better player than Jordan or not, he has shown himself to be a far superior character

Each summer, James hands out hundreds of free bicycles to children. A small yet significant part of his wider philanthropy, it is loaded with symbolism. During his own hardscrabble upbringing, father absent, mother Gloria often struggling to keep them housed, there were many nights he didn’t know which friend’s couch he’d be bunking down on. Back then, if he had a bike, he had mobility, freedom and the ability to get to a better neighbourhood. Not to mention the opportunity to stay out of trouble and on the path his basketball talent was paving for him.

Almost 16 years have passed since ESPN televised a high school basketball game between Arkon’s St Vincent-St Mary and Oak Hill Academy from Virginia. An unprecedented broadcast designed to give America its first up-close glimpse of a callow 17-year-old James, there was much criticism of the move and legitimate concerns that it might be too much spotlight too young for the phenom. That was 2002, when Tiger Woods was about the biggest star on earth and, according to his father and Nike, somebody who was going to change the world. Turns out Tiger couldn’t even change his own stripes.

ESPN justified the hype by claiming everybody wanted to see the supposed “next Michael Jordan”. Whether he has proved a better player than Jordan or not, he has shown himself to be a far superior character. Whereas his predecessor famously protested, “Republicans buy sneakers too!” and feared political stances lest they damage his commercial viability, James has been outspoken on social issues. He wore a hoodie to highlight the unjust murder of Trayvon Martin, donned an “I Can’t Breathe!” T-shirt to show his support for the case of Eric Garner, regularly derided the gun culture, and routinely called out the idiocy of Trump.

At no stage has he appeared bothered by how his advocacy might impact on a burgeoning and diverse business portfolio that includes a Hollywood production company, a stake in Liverpool Football Club, and a share in Cannondale Bicycles. The way in which he has built an empire yet retained a social conscience and asserted his right to speak up on behalf of the less fortunate is why he has always been far more Ali than Jordan. A lot shrewder with his money than the famously profligate boxer, he evinces the same kind of native intelligence and, crucially, shares an awareness of the outsized influence he can wield away from the sporting arena

As the puerile president tweeted about LeBron’s “stupidity” last weekend, James didn’t dignify it with a response. However, earlier this week he announced that, in partnership with Showtime, his company will produce a documentary series about athlete activism called “Shut up and Dribble”. The title is taken from something a Fox News Channel harpy screeched about James when he said Trump “doesn’t give a f**k about the people” back in February. He didn’t shut up and dribble then. Won’t now. More power to him.

1 Seán O’Brien: Anger over my parents’ break-up never left me
2 Madness or defiance? The GAA is taking a huge gamble in staging Championships
3 Gibson-Park, Earls and Kelleher all in race to make Ireland’s French finale
4 The Offload: Outgoing Tom Grace will be missed by IRFU
5 Dan Martin keeping it day-to-day as Vuelta proves challenging for riders
Real news has value SUBSCRIBE

Son Heung-min the right man in the right place again as Spurs win at Burnley 22:11
Karlan Grant scores his first West Brom goal to rescue deserved point at Brighton 20:26
Dan Martin keeping it day-to-day as Vuelta proves challenging for riders 19:15
Mercedes’ Wolff hails Hamilton after his record win in Portugal 18:41
Alisson: ‘I believe my faith and working hard helped me in this fast recovery’ 18:21
Here is your handy guide to sport on television this week