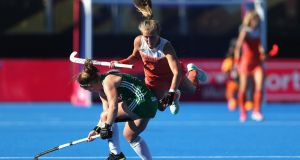 And so, the dust settled, the hockey field was rewatered, and in among the Dutch celebrations, Irish pride was at an all-time high.

After a blistering and pulsating tournament (where Google searches contained the words hockey, penalty corners, FIH, Ayeisha McFerran, Shirley McCay, Graham Shaw) the new-found Irish heroes were greeted with cheers, high fives, hugs, tears and of course, the incredible visionary that is Shane Ross . . . but more on him later.

Yes, I was one of those that hopped on the bandwagon too. As did my father, brothers, sister, nieces and really, whoever was in close proximity to me rambling on about how cool hockey is and did you see Gillian Pinder as cool as a breeze or Ali Meeke with the skillz4dayz to practically seal a semi-final place.

Ireland may not be the actual world champions, but they are on merit, on unity, charisma, fun and everything you tell your kids about when they sign up to a sports camp or start training with their first-ever team.

Rather than pushing through the World Cup relying solely on skill and individual brilliance, the Irish team were able to overcome every obstacle and every hurdle through their unity. They embarked on a journey together – theirs was marked by tales of working their asses off in the dark behind closed doors with nobody watching.

After all, champions aren’t born on the field in front of the photographers, lights, fans, cameras and action; champions are genuinely formed in the small hours with blood, sweat and tears.

The team’s bond was highlighted day by day, with Ali Meeke singing Justin Bieber’s Baby live on TV; Shirley McCay saying in an interview that a stick to the face just adds beauty; and goalkeeper of the tournament Ayeisha McFerran squealing with excitement on TV just after she put in a Player of the Match-level performance against India. You see, these girls definitely deserve your support and everything that comes with it.

We have seen how doing well in an international competition can fundamentally inspire young people and children to take up sport. But these figures are even more critical for women in sport.

It has been over a year since the Dutch women’s football team won the Euros on home ground against the Danish. The growth of women’s football in the Netherlands increased by 2,034, with the spike coming post-European Championships.

Ironically, football in the Netherlands is competing with the most popular sport, field hockey. The point is, more success and more visibility and recognition will always translate into growing participation rates and, most importantly, a higher fan base.

Take the Danish side that lost to the Netherlands. Sure, they had a massive fight on their hands when bargaining for equal pay and a new collective bargaining agreement, but overall their average national team game attendance is 2,152.

The figures don’t lie, and the best part is it highlights one thing that every women in sport fan, player, coach, referee, official will tell you – the more recognition and the more visibility a sport gets – then you will begin to see the results on the field through underage structures and beyond.

Now, the key thing for Irish hockey and Irish sport, in general, is how they can capitalise on the explosion in positive PR and how the funding can help results and be translated into success for this generation and upcoming generations.

However the way Shane Ross swanned in like a wanna-be Prince Charming and dished out the funding Oprah-style is the epitome of bandwagoning. If you’re going to bandwagon, Mr Ross, remember that time you mixed up the Kearney brothers or misunderstood when Katie Taylor was fighting at the Rio Olympics and wished her luck after she was knocked out?

Not only was Ross’s demeanour that day weird and slimy, who actually thought was a good idea to put him on a podium in front of the girls announcing funding as if he had just offered them loaves and fishes?

Who thought it was right having Shane Ross standing and smirking in front of these women who had done their country proud , dangling money in front of them the same way you a dangle a carrot in front of a donkey?

For me, that whole showman, Bachelor-esque PR is awful and honestly offensive to the women who put their lives on hold to put smiles on the nations faces.

I agree in theory every sport should be given money based on performance and participation. But that throwing over a million euro in funding after heroic displays in a pulsating tournament is not the best way to conduct business.

The hockey women are entirely within their rights to get their money back, but all I can do is hope the good people of Irish Hockey don’t do the most Irish thing ever – blow the money on the current reaction, thus leaving hockey back on square one. I see it all the time in my activism work.

National sporting bodies are the same everywhere, they rely on putting out forest fires on a shoestring budget and rely on the excellent work done by volunteers. It’s time we changed that. It’s time the money given is put towards what it was meant for, for the development and continued success of Irish Hockey.

Success doesn’t happen overnight; this hockey team are a testament to that. But here’s hoping this success will continue and inspire more generations to come along. Put heads together and seek to extend this fantastic, unprecedented change. Because this team did it, and they deserve to have their legacy become the blueprint for future success.