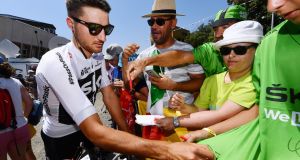 Gianni Moscon accepted his suspension and admitted: ‘I reacted in the heat of the moment.’ Photograph: Philippe Lopez/AFP/Getty Images

Gianni Moscon has been suspended for five weeks by cycling’s world governing body for his expulsion from the Tour de France — but the controversial Italian has earned a reprieve from Team Sky.

Moscon was disqualified from the race for punching Fortuneo-Samsic rider Elie Gesbert early on stage 15 to Carcassonne on July 22nd.

The UCI announced on Wednesday that the 24-year-old Italian has been banned until September 12th.

Brailsford said on teamsky.com: “We have a duty of care to all our riders which we take extremely seriously. Gianni is still a relatively young rider at the start of his career and we will continue to give him the help and support he needs to learn, develop and move forward from this.”

The incident 800metres into the stage was just the latest in a long line of disciplinary mis-steps from Moscon, who was suspended for six weeks last year after racially abusing fellow rider Kevin Reza.

Brailsford said, during the Tour, he would consider if Moscon should face further punishment after the race, which was won by Team Sky’s Geraint Thomas.

When asked directly, Brailsford would not rule out terminating Moscon’s contract, but Team Sky have now stopped short of that action.

The UCI on Wednesday said its disciplinary commission had disqualified Moscon from the Tour and suspended him for five weeks.

Moscon said on teamsky.com: “I accept the suspension given to me by the UCI.

“I reacted in the heat of the moment and it was never my intention to hit the rider.

“As the footage shows I didn’t make contact, but I regret my actions and I have already apologised to both Elie Gesbert and Team Fortuneo Samsic for the incident.”

Brailsford added: “We accept the UCI’s decision to suspend Gianni for a five-week period.

“This incident obviously happened during one of the most challenging races the team has ever faced. We are confident that Gianni truly regrets his actions and has learnt from this episode.”