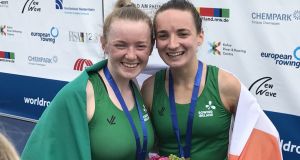 Aoife Casey and Margaret Cremen are in action at the World Junior Championships in Trakai in Lithuania.

Another weekend, another Ireland crew in contention at an international event. This time it is the double of Aoife Casey and Margaret Cremen at the World Junior Championships in Trakai in Lithuania.

The Skibbereen/Lee crew will compete in the quarter-final at 10.06 on Friday. They must place in the top three to move into Saturday’s semi-final.

Casey and Cremen were third in their heat on Wednesday, but taking third or better in the quarter-final may actually be easier – they took on Britain and Germany, two of the best crews around, in the heat.

Both were faster than Canada and the Netherlands, the heat winners who Ireland take on today. The Ireland double had the sixth fastest time overall in the heats and should go through.

Back in Ireland, the National Rowing Centre has been thrumming with activity. Crews are preparing for the World Championships in September/October in the United States, which will be covered on television by RTÉ.

An interested visitor last week to the NRC was the incoming high performance director Antonio Maurogiovanni. The Italian takes up his post officially on Monday, August 21st.

The Irish Rowing Championships have had a knock-on effect, with one club official paying a fine and some clubs fined for crews not appearing after they were declared.

The upswing in Ireland rowing has been matched by an increase in funding from the Sports Council – but only to a degree. The funding for the high performance programme this year is €525,000, up €125,000 on 2016.

However, the historical perspective is interesting.

Trinity have appointed a new chief coach. Richard Ruggieri is an American who has coached at college level there with the University of Louisville, Clemson University and Tulsa University.

The Cairndhu club in Antrim was suspended by its local association after it affiliated to Rowing Ireland, but it looks as if Cairndhu will be able to compete at Ballyshannon as it has now affiliated directly to the Irish Coastal Rowing Federation.

Rowing Ireland has this year made it a requirement that clubs which compete in Fisa events affiliate to it for this activity.

This Sunday, August 6th, Carrick-on-Shannon hold their sprint regatta. The regatta will also host the final leg of the Waterways League, a competition for junior 14 and junior 15 competitors.

Drogheda in the driving seat as Division One reaches a thrilling finale 06:00
Regionalisation may be the key as league adjusts to new reality 06:00
Damien Comer to miss another Connacht championship following hamstring injury 06:00
Ireland's centre will hold thanks to Henshaw and Aki’s midfield muscle memory 06:00
Gerry Thornley: Antoine Dupont and France look perfectly primed for Ireland visit 06:00
Here is your handy guide to sport on television this week